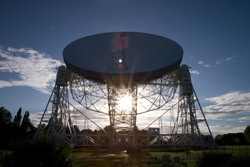 The writers of the Psalms wrote about stars using the most up-to-date science of their day. Cutting edge astronomers in Israel in the first millennium BC knew that the stars were created, they had their places, and they (on the whole) kept to those places and danced their set dances every year.

He determines the number of the stars
and calls them each by name.
Great is our Lord and mighty in power;
his understanding has no limit.

There is a wealth of hymns and songs that echo this theme but while science has moved on, the language in the songs hasn’t. I’m not suggesting that we do away with the old hymns, or that we use lyrics that might be divisive in a church context, or even that we tie ourselves in knots with technical jargon (I don’t think I could sing about DNA transcription with a straight face!) But what would it look like if we praised God in song for some of the things we have discovered in the last couple of centuries?

Here is an example of a hymn that uses up to date scientific knowledge, written in 1967 when the space race was at its peak.

God, who stretched the spangled heavens,
infinite in time and place,
flung the suns in burning radiance
through the silent fields of space…

We have ventured worlds undreamed of
since the childhood of our race,
known the ecstasy of winging
through untraveled realms of space…

What would it look like if more writers of worship songs and hymns started to include references to slightly more contemporary science?