Worshipping God with Science: Beauty from the Earth

Grossmünster in Zürich By Roland zh (Own work) [CC BY-SA 3.0], via Wikimedia Commons

I’m always keeping my eye out for ways to bring science into a church context, and I recently found a new one in Switzerland. Two buildings in the centre of Zurich, the Grossmünster (great minster) and Fraumünster (women’s minster) are decorated with the most incredible stained glass, designed by the artists Marc Chagall, Augusto Giacometti and Sigmar Polke. I had already seen examples of scientific themes in stained glass, such as the windows by David Hunt in St Crispin’s, Braunstone, but some of Polke’s windows took this idea to a new level. 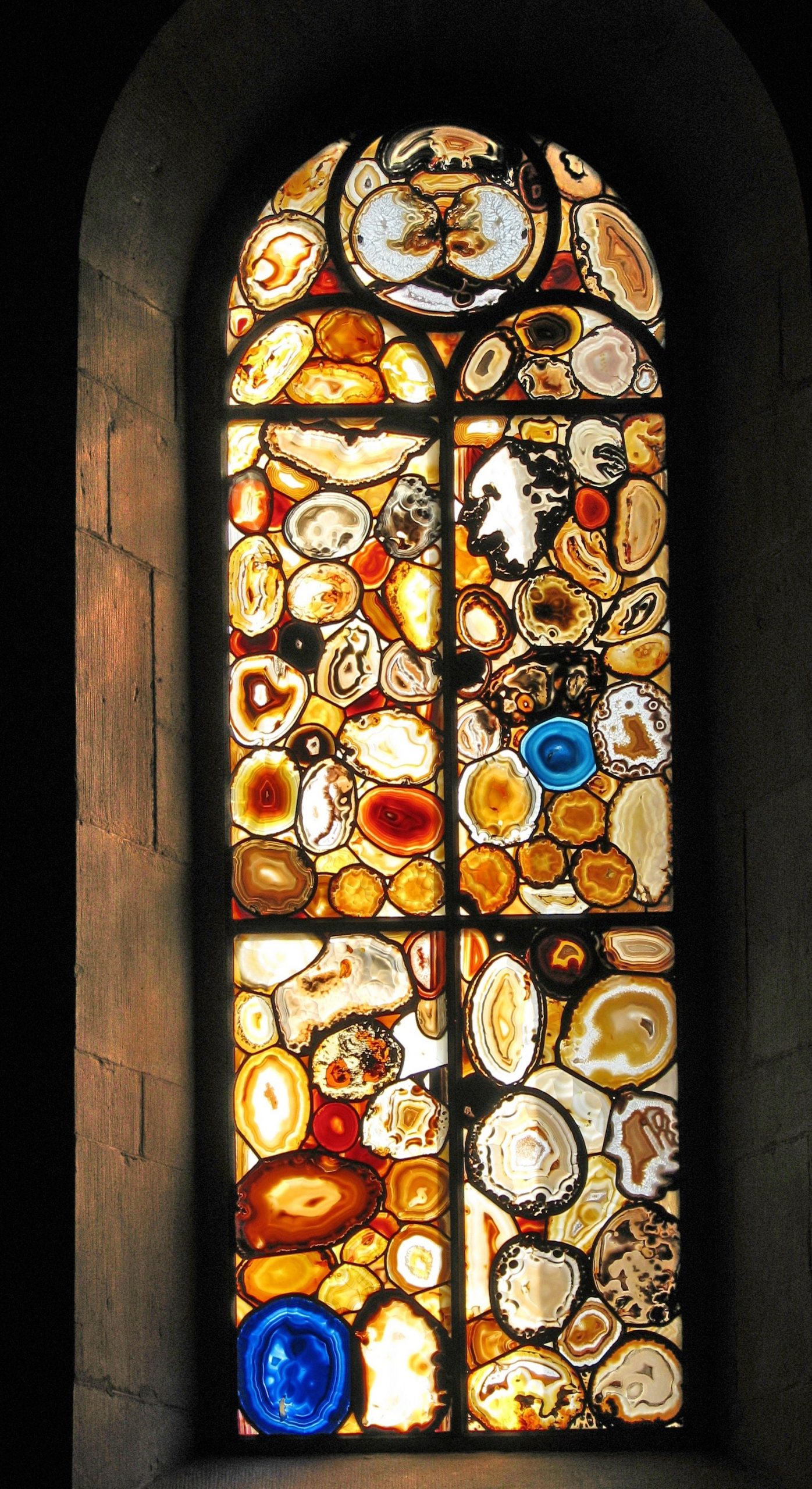 Interior view of Grossmünster in Zürich By Roland zh (Own work) [CC BY-SA 3.0], via Wikimedia Commons

The panes over the entrance of the Grossmünster are decorated with very thin slices of rock, pieced together like a brightly coloured jigsaw. The rock is agate, a semi-precious stone that forms in the air spaces inside volcanic rock. As groundwater leaches through the rock, some of the dissolved silica is deposited in the spaces. Other chemicals dissolved in the water give the silicon its colour, and as the composition of the groundwater changes over the years the colour of the silica being laid down also changes. The result is a type of beautifully banded translucent rock that ranges from subtle creams and pinks through to bright blues, reds and greens.[1]

The first window I encountered in the Grossmünster was a semicirclular design, laid out in a mirror image pattern using reds, greens, blues and browns. The other six windows are long panels, each one using a narrower palette of colours than the first. I was fortunate enough to be there on a sunny day, and the overall effect was completely stunning. The entire western part of the church has a dim subterranean feeling, and the complexity and colours of the patterned rock make each window completely unique. I hurried to follow my friend who was making a beeline for the Giacometti windows, but I returned several times to take in more of the detail of Polke’s simple but fascinating designs.

As a scientist, I felt quite at home with the concept of using geological samples in a church building. It felt entirely appropriate to find such beautiful and ancient things in this context. These works of art took millennia to form, and were finally revealed by the skill of dedicated craftspeople for the glory of God. It’s a more subtle approach than the church Sarah Losh built in Wreay, but has a similar effect – bringing the praise of people and creation together in one place.

[1] Quite a lot of agate is pale in colour, but it can also be dyed.

Category: Beauty, Church, Geology, Science And The Church, Wonders Of The Living World