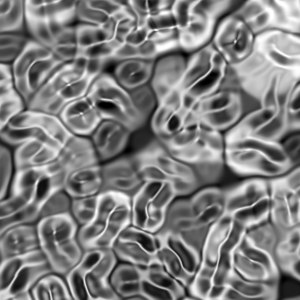 What motivates a scientist to wrestle with difficult questions? Rhoda Hawkins is a lecturer in Physics at Sheffield University. She uses theoretical physics to tackle biological problems, and her main area of research is cell movement. I recently interviewed Rhoda about the role of wonder in both her research and her faith.

I find cell movement incredible. You’ve got a blob of squidgy material crawling across a surface or squeezing through a gap, and if it’s a white blood cell it might be doing something more complicated like chasing a bacterium. How is a relatively simple cell capable of doing such things? In my research group we try to model the cell and think about its physical properties. I collaborate with experimentalists – mainly biologists and other physicists, who test our predictions. I like hanging out in the lab every now and then to watch what the biologists are doing. If the experiment shows something different to what we predicted, then that might mean the model is wrong so we change the theory, and that informs new experiments. Maybe one day some of my work might be useful in medical applications: perhaps a better understanding of the immune system or the movement of metastatic cells in cancer.

One of the real drivers for me in this work is that I get to work at a very fundamental level, asking questions like ‘How does that work?’ Sometimes as a child, when you keep asking ‘Why?’, adults get frustrated with you and effectively tell you to shut up. Scientists are the people who are still allowed to ask those questions. Every piece of research I do always leads to more questions. It’s like exploring a castle: you open a door and realise there are more rooms than you thought. I’m not able to leave those questions alone. Some people can look at a rainbow and say, ‘That’s beautiful’, and leave it at that. I can’t stop there – I want to know why. Sometimes I get bogged down in projects where the question I’m asking is too difficult, or beyond where we are at the moment and we just can’t answer it. That’s really frustrating, but struggling with it is better than not trying. If you’re not allowed to ask the questions, it’s stifling.

What gives me an enormous sense of wonder, is when I do a calculation and it works. That does not happen often! Usually I’ve proved the equivalent of something like zero equals zero. Every now and then I solve a calculation and get an answer which makes sense physically, and that is extremely exciting. I find it incredible that we can use the language of mathematics and our finite human brains to understand something in the physical universe. There’s an amazement about it that goes beyond what I’ve done myself – an acknowledgement of beauty.

This article was originally published in the newsletter of Christians in Science, and is reproduced here with permission. Part 2 here.