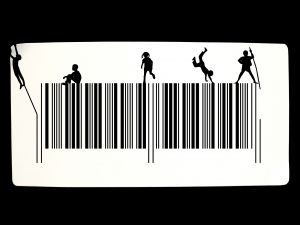 Incredibly, every living thing – you, your cat, the plant on your desk, and the bacteria in your toilet – share exactly the same genetic code. It has been suggested that the particular code we all use was arrived at by chance, and that we have a shared genetics because we have a shared ancestor.  Others think while it’s true that we have a common ancestor, our molecular biology is highly optimised.

The genetic code is fascinating because it links two completely unrelated biological systems. It’s rather like sending a message in Morse code and receiving it with a machine that uses binary numbers. The two codes are completely unrelated, but it’s possible to translate between them. It sounds odd, but this juxtaposition of completely different systems works incredibly well in living organisms.

One half of the genetic code is spelt out in DNA, a long molecule made of four building blocks designated A,T,C and G. The DNA of any organism contains almost all of the instructions needed to reproduce itself, but in order for life to progress we need proteins. Proteins catalyse biochemical reactions, form the structural basis of our bodies, and do a myriad of other useful jobs. Proteins are made up of long chains of amino acids: a completely different kind of molecule to DNA. So the DNA code must somehow be translated into another language.

The go-between is RNA: a long chain of As, Cs, and Gs and Us (not T) rather similar to DNA. To make each protein, a section of DNA is translated into a long string of messenger RNA (mRNA), which is read off in turn as a long string of amino acids that are then folded up into a protein. This is known as the ‘central dogma of molecular biology’. mRNA works in combination with transfer RNA (tRNA) – a set of nifty molecules that link mRNA and amino acids. Each molecule of tRNA recognises three letters of the mRNA code, and carries its own particular amino acid molecule. So the tRNA molecules take it in turns to line up on the mRNA message and the amino acids they carry are joined together to make the protein chain – it’s a beautiful system.

Last weekend I heard a lecture by NASA Astrobiologist Stephen Freeland at the Faraday Institute God and Genetics course. One of the main topics in Astrobiology is the origin of life, and one of the biggest questions is how DNA and amino acids became genetically connected in the first place.

During his PhD research, Freeland found that the DNA code words recognised by tRNA are not random. tRNAs carrying similar amino acids recognise similar code words. This means that small changes in the code words (mutations) don’t always cause problems because the mutated tRNA might be carrying an amino acid that’s similar to the one it’s supposed to have, and the protein might be able to do it’s job after all. All that was known in the 1960s, but what Freeland discovered is that randomly generated genetic codes don’t work nearly as well – the one we use appears to be highly optimised. Somewhere along the line, the process of evolution has weeded out all the ineffective codes. In his latest research, Freeland and his team have discovered that the twenty amino acids used in living organisms are not just a random set out of the hundreds that exist, but are also highly optimised in order to create an efficient protein building system.

Having said all that, Stephen Freeland does not quite agree with Simon Conway Morris who says that evolution has a good deal of directionality. He is not sure what would happen if you ‘re-ran the tape of life’. There is some predictability in the system, but as far as Freeland is concerned, the jury is out on just how much. On the other hand, the existence of life on other planets is apparently highly probable*, so if alien life is discovered, that will perhaps answer the question!

*Probably microbes or simple multicellular organisms… And in case you wondered, Freeland is not convinced by the idea of ‘panspermia’.