Wishing away the Higgs Boson – Reflections of a PhD Student 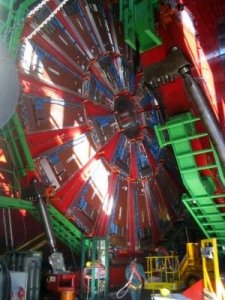 This post is the result of an interview with Anna Walker, a PhD student in Physics at University of Wisconsin-Madison. It’s interesting to hear the thoughts of someone at the very beginning of their career in science, and to see some familiar themes emerging.

A lot of people come into grad school thinking they’ve got everything figured out, but by the end of the first year you realise that you know nothing. I think it ought to be that way, especially in a field like physics.  I can make predictions and I can do experiments, but in the end I have to be humble about what I actually know.

There’s a sense of awe that hits me when I read through a paper or textbook and learn about the way the world works. I try to keep my eyes open so I can see ways in which the physics that I’m studying is actually bringing glory to God. If I’m jaded it’s very easy for me to lose that sense of childlike wonder at the universe and dismiss what I’m seeing as simply mechanistic.

I’m studying the interaction of atoms with each other and with light. The ultimate aim is to make measurements in different technological applications. For example, one of my fellow students is attempting to detect a foetal heartbeat by using atoms to measure changes in magnetic fields. I am developing a system that uses a tiny volume of rubidium vapour, the atoms of which are aligned and controlled with a laser in order to detect changes in magnetic fields. It’s precise and time-consuming work, but I really like tinkering with things and working with my hands.

At the moment I’m trying to create the right sort of magnetic field. It’s interesting because I’ve come up against several brick walls where I can’t seem to go any further. With all the circuits I’ve built before it’s been fairly well known how to deal with the problems, so it’s been exciting to go through the process of starting from the basics. In principle what I want to do should be possible, so it’s a matter of finding the best way to do it.

Of course physicists will recognise that we don’t know very much about the way the world is, but I find that a lot of them don’t think about that on a day-to-day basis. They’re thinking more along the lines of how much they actually do know. Scientists are always trying to get to that next level of understanding of the universe, and they think that if we go just one more step further we’ll understand why everything is the way it is. I find that ironic.

At the beginning of the last century, physicists thought they had everything figured out – but it was just the tip of the iceberg. The quantum mechanical revolution came along and changed everything. Now I think we’ve pushed the boundaries as far as we can with what we know, and there’s probably going to be another revolution of the quantum mechanical sort that will blow our minds and we’ll realise that we really had no idea what was going on. Take the Large Hadron Collider. I’m sure that part of every physicist wants there to be no Higgs Boson [the particle that the LHC is hoped will discover]. Either this particle has to be there or we have to revolutionise everything we know about physics. It would be exciting to witness that revolution.