Why I am a Christian 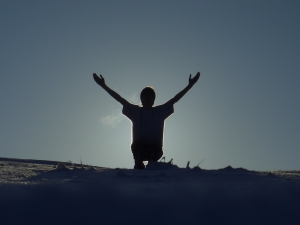 When describing her own Christian faith, Rosalind Picard, a Professor at the MIT Media Lab, said that ‘I know some people will assume I have lost my marbles…I also know that if they move beyond such superficial characterisations and ask hard questions, the ones about real meaning and purpose, that they will see more of what I see.’ That is how I feel in trying to describe my own faith. I’ve already given some hints about what I believe in previous blogs[1], but I thought it would be good to spell it out a bit more.

How can a scientist be a Christian? W.K. Clifford, a mathematician and philosopher at University College London in the nineteenth century, said that ‘it is wrong always, everywhere, and for everyone, to believe anything on insufficient evidence’. I agree with Clifford, although our definitions of evidence will no doubt vary a bit.

Some people want scientific evidence for everything, but there are some questions that lie outside the scope of science. For example, mathematics, logic and philosophy are all very important disciplines that have contributed to the assumptions and practice of science, but they don’t come from science.

Science also assumes that we are rational, that experiments are repeatable, and that we can find law-like behaviour in the world. All of these assumptions come from outside of science. Finally, science can tell us with great accuracy how the material world works, but it cannot answer questions about ultimate truth or meaning. So I will use a few arguments both from within and outside of science to make my (very short) case for faith.

The best analogy for an examination of Christianity is a legal trial, rather than a scientific experiment. You need to weigh all the evidence and make a judgment. You have to take some risks in order to answer an important question about the way things are. That’s when I find it helpful to use the analogy of a relationship. If you enter any relationship with a person science isn’t the first thing on your mind: there are more important ways of knowing someone. Christianity is about a personal God, so the same principle applies. There are other ways of knowing in life: philosophy, history, logic, eyewitness stories, personal experience, and so on. To investigate God you have to look at all of these and more. Here are three that have been particularly important to me.

First, there is both great beauty and a fantastic level of order in the universe. To me, these are hints that suggest an organising mind or being was involved in its origins. The fact that we can make sense of the world using mathematics is astounding – could a chaotic uncontrolled process have produced that? It also looks as it the universe was set up so that life could evolve, and people call this fine-tuning or the anthropic principle.

Second, I was drawn to a God who revealed himself in history, and in person. If you stop at fine-tuning, you will have the religion of Einstein: a being is or was there but we have no interaction with him, her or it. To find out any more about God you have to look at the person of Jesus, and there are quite a few things about him that we have good evidence for. Jesus of Nazareth existed, he taught as an itinerant Rabbi, developed a large following, and was crucified. His followers claimed to have seen him alive again, no one ever found his body, and his following increased. The Christian church became famous for being a positive force in society, and has never stopped growing since.

Third, the evidence of answered prayers and changed lives is also important, and to me this one speaks the most loudly (though without point 2, this one wouldn’t be worth bothering about). Christians are followers of Jesus, and we believe that Jesus was God. God created the world, communicated with the people he made, developed a relationship with them over several millennia, and finally came to show himself to us. Jesus was born into a poor family, and remained poor throughout his life. He showed that God is wise, loving and forgiving, respects people regardless of their gender, age, race or position in society, and hates injustice and religious hypocrisy. He taught by asking questions and telling challenging stories. In other words, he was more concerned that people follow in his footsteps, thinking maturely about their decisions, than live by rules.

The Christian way of living is a challenge, and involves a level of generosity and love that is difficult to sustain. God knew we could never be perfect, so he didn’t just leave us to our own devices. Instead of leaving us to die, which was the natural consequence of our wrongdoings, Jesus died to give us freedom and a way of being with God forever. After Jesus came back to life (there was no way God was going to stay dead) and returned to his Father, God sent the Holy Spirit who is a source of wisdom and power for his people. We can also pray, coming into God’s presence to ask for change in the world and to be changed ourselves. Another resource is the Church: a group of people who worship God and try to follow Jesus’ teaching, supporting each other and reaching out to the community around them. Of course people are not perfect, and Christians are not God’s puppets, so we mess things up. Despite our limitations as human beings, the Church remains God’s way of working in the world – we can’t function well alone.

Faith in a person or in God is not irrational; it simply goes beyond the limits of pure reason.[2] As the French mathematician Blaise Pascal said, ‘Faith certainly tells us what the senses do not, but not the contrary of what they see; it is above, not against them.’[3] This was also the approach of C.S. Lewis, who is often quoted by the theologian Alister McGrath as saying, ‘I believe in Christianity as I believe that the sun has risen, not only because I see it but because by it I see everything else.’ If faith is in something real, then even if that reality includes something beyond what we can detect with our senses, it should help us to make more sense of the world than we could otherwise.

I’m a bit biased, but I think scientists are often more open to these things, and it’s to do with their idea of truth. The Test of Faith book tells how some scientists found faith through a full exploration of Christianity. They were courageous enough to realise that they needed to investigate it with an open mind. I think that’s one of the marks of excellence in science: to be aware that you might have been wrong; to disprove your own theories, and be prepared to change your mind, even if it means changing the whole direction of your future research.

There was a commonality between the different scientists I interviewed for the Test of Faith book. The ones who became Christians as adults were all challenged to look at it by a friend, they realised they had not considered it properly before, and wanted to find out the truth. For a scientist the truth is something real and solid, it’s a brute fact and you can’t deny it. But if you discover the truth that’s a good thing – that’s the whole point of life, even if the consequences are a bit uncomfortable to begin with and others might think you’re crazy. If your data and your interpretation of it were good, then that risk will be worth it.

Evidence for the resurrection – Frank Morison, Who Moved the Stone?

Scientists who are Christians (book) – Test of FAITH

A book that has influenced many scientists with its logical arguments – C.S. Lewis, Mere Christianity

Can we believe the Bible? (book) – Amy Orr-Ewing, Why Trust the Bible?

[1] See my blogs on Why would a scientist be a Christian,  What do Christianity and science have in common,  assessing evidence,  thought experiments, the creativity of God and redeeming creativity.

[2] From ‘If science is the answer, what are the questions?’, lecture by Alister McGrath, Cambridge Science Festival, 2013

[3] From N.K. Frankenberry, The Faith of Scientists: In Their Own Words (Princeton: Princeton University Press, 2008)