When Autumn Arrives Early: Parasites and the kingdom of God 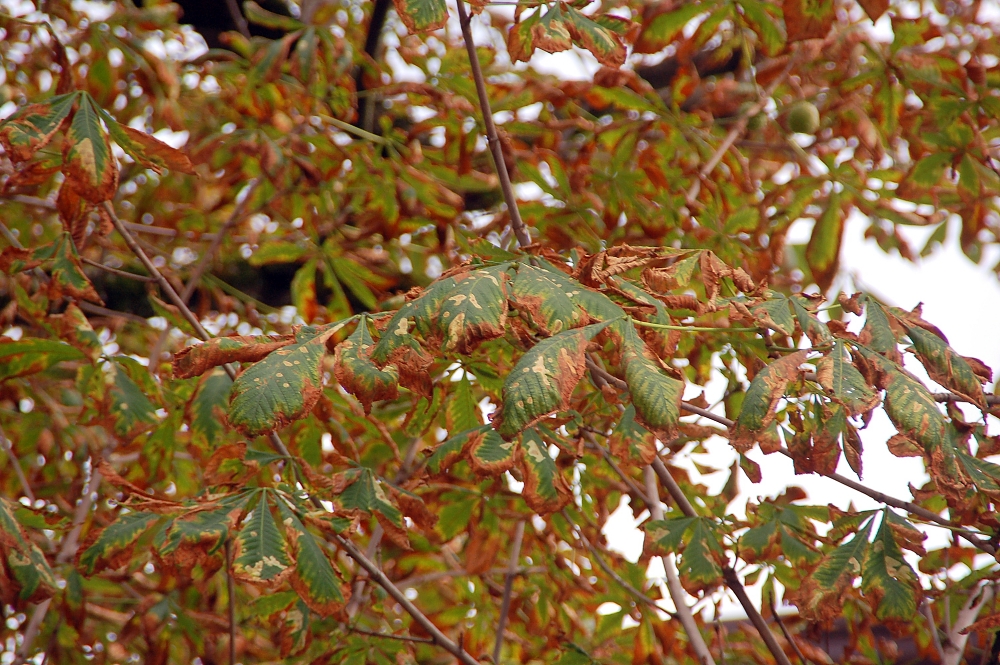 Autumn comes late to Cambridgeshire, but the horse chestnuts drop their leaves long before any other tree has begun to change its colour. Often the cause is the terrible and somewhat mysterious bleeding canker that now affects about fifty per cent of all horse chestnuts trees in the UK, but some are more fortunate.

One of the most benign parasites a chestnut tree could catch is the leaf miner, Cameraria ohridella. The adult lays its eggs on top of the leaves, and when they hatch the larvae burrow inside, eating the succulent green parts while the waxy covering stays intact. Although the tree can lose much of it leaves in this way, most of the damage happens later in the year so it can grow and breed much as normal.

I came across an ohridella-infested tree when I was walking through the grounds of Madingley Hall a few weeks ago. Its leaves were polka-dotted with pupating larvae, each hidden inside a tight brown case. I found one that was still active, visibly squirming between the two layers of a hollowed-out leaf. A gentle tear released it from its burrow, and a tiny brown head waved from side to side, presumably looking for another meal. At only a few millimetres long and flattish, with the remains of a digested leaf visible inside its translucent body, this tiny predator was almost beautiful.

Many of the leaves on this tree had been most efficiently mined and were now dying, covered with wannabe moths. The ground around was littered with rust-red drifts, which if the gardeners had time to clear them away would break the cycle of infestation, allowing the tree to stay green until a more normal time next year. 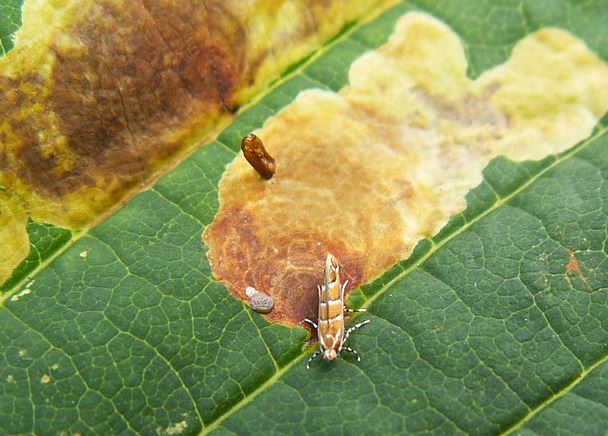 The adult ohridella moths have beautiful brown and cream stripes, but I didn’t manage to spot one. They are only five millimetres and must be extremely well camouflaged. They are classed as an exotic parasite, though they seem to have spread from the same region of Macedonia where the tree itself originated. So while a landowner may want to keep their trees looking nice and green, ready for a ‘natural’ autumn, should we really be letting nature take its course – allowing these natural predators to eat their fill?

Is parasitism a reminder that the world does not revolve around ourselves? Parasites can be part of a healthy ecosystem, eating and being eaten like every other living organism on the planet. Humans are part of the whole cycle, keeping some areas parasite-free for agriculture, travelling large distances and unwittingly taking parasites with us to infect new places, or breeding new plant varieties that are more or less resistant to certain insects.

Some might think that parasites evolved a step too far – a sign of the brokenness of the world that will be healed one day. The question remains, however, do we have a right to call certain organisms ‘pests’ because they inconvenience us? Anyone who has faced a famine because their crops have been lost would no doubt say so. But are these problems caused by wider issues of poor agricultural practices, inequality, and reluctance to share – particularly with people who are different to us, or so far away that we find it hard to identify with their troubles?

Perhaps it’s not fair to blame the problem on other creatures and the processes that produced them. Certainly human interference can take things beyond the brink, weakening species and making them more vulnerable, or spreading infective agents around until they are rife. The canker disease that is killing so many chestnut trees is perhaps in this category – caused by a microbe, but perhaps also a result of centuries of mismanagement.

Will we eventually find sustainable ways to keep ecosystems healthy and people well fed? There are huge challenged here for both agriculture and conservationists. What’s more, will there be parasites and hungry microbes in the “new heaven and new earth”? I would love to know what discussions have been going on among Christians in this field. 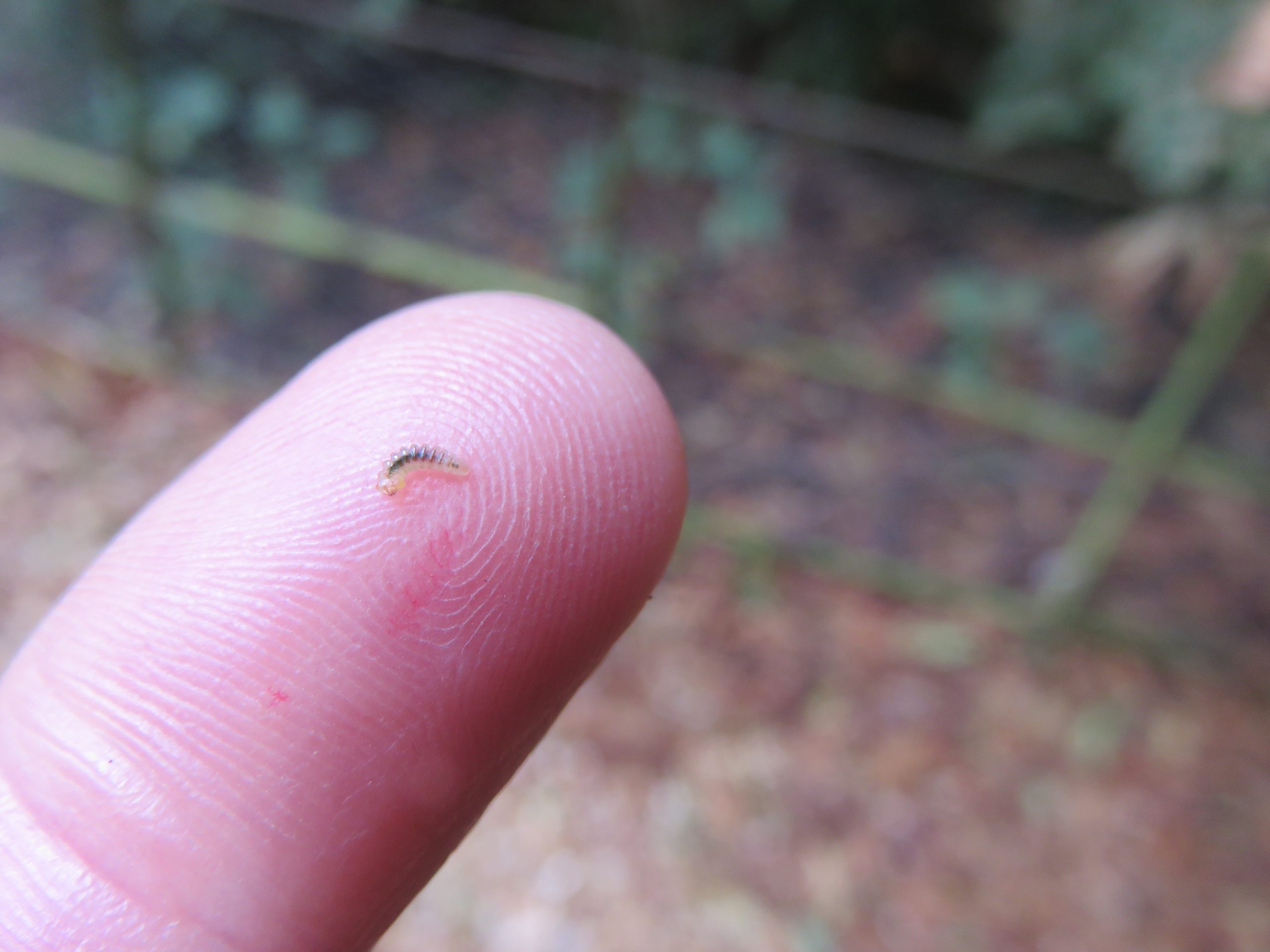 As a biologist, I find creatures like the Horse Chestnut leaf miner fascinating and incredibly clever in their adaptations. I would be sad to live in a world without them, but I know I am largely sheltered from their greatest ravages. I can only hope that in scientifically-oriented countries we can come to understand the dynamics involved and learn to exist without feeling the need to obliterate so many insects.