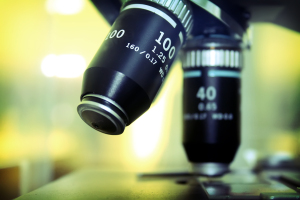 There is great beauty in science, whether in the experiments themselves, the data produced, or the presentation of that data. There is also great wonder, and that is what drives science forward. How does a seed grow into a plant? What is a star made of? Can we describe the movement of a cell using mathematical equations? At times wonder gives way to open-mouthed awe as we see something vast, incredibly complex or highly ordered.

Awe is enjoyed and cultivated by all scientists, despite their different personalities, and popular science writing is invariably full of awe and wonder – whatever the beliefs of the author. At times I feel like the writer of a medical drama who collects the most exciting moments in a person’s entire career and packs them all into a single episode – that’s ok, so long as you realise that in between are days, weeks or months of hard slog and disappointment. Moments of wonder and awe are the rare high-points in science: a reward for the daily grind of life in the lab, the office, or out on fieldwork. Finally something is understood, and it stops you in your tracks. Or maybe you see something unexpectedly beautiful or intricate as I did in my first encounter with a Zebrafish larva. These are often the most memorable moments in a scientist’s career. You want to share them with others, so you show photographs or tell and retell the story in different ways.

The theologian and philosopher Austin Farrer wrote that a scientist may experience ‘constant amazement at the…world which yields such complex and ordered responses to his yardstick method. But this amazement, this almost religious awe, does not find direct expression in his scientific activity; in so far as he entertains such feelings, he is more of a metaphysician than a pure scientist. That is only another way of saying, that as well as being a scientist he is a man; and indeed, most scientists are human.‘[i]

How do these human responses play out? As I have mentioned before in this blog, the sociologist Elaine Howard Ecklund carried out research into the beliefs of scientists in the top 21 elite US universities.  She found that 20 per cent of scientists in this cohort were not members of any religious group, but considered themselves spiritual. Their experience of beauty, awe and wonder in their work led them to believe that there is something beyond science – one could perhaps call ‘transcendent’. For some of the researchers that Ecklund and her colleagues interviewed, this ‘other reality’ motivated them in their research, their teaching, and their lives outside of the lab.

I remember having a conversation with a colleague who had experienced something along these lines. We were sitting in the lab examining Zebrafish larvae. As we stared down our microscopes we talked about how much we enjoyed looking at these tiny creatures and watching them grow. My colleague told me that he occasionally had a moment of clarity when he realised something important about how amazing nature is. Those rare experiences of wonder and awe were a source of inspiration for him, and one of the reasons why he wanted to stay in research and become a lecturer: he wanted to share those moments with others.

This post is an extract from an article that was first published in Third Way magazine (April 2013), and is reprinted here with permission.