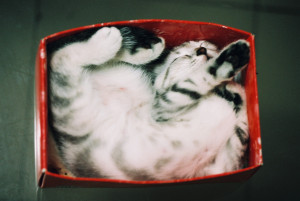 Imagination isn’t a word that’s often used by working scientists. Most of the scholars I’ve met on my travels through the libraries of Cambridge have been philosophers, with the occasional retired scientist who is confident enough in their scientific achievements to write on more esoteric subjects. It didn’t take long, however, for me to realise that imagination is absolutely vital to the practice of science. (More on theology later.)

What I’m talking about here is not fantasy, which has no place in the laboratory, but imagining. For example, thought experiments have often been used in science. The Faraday seminar series is not linked in any way to my project, but by wonderful serendipity the Danish theologian Niels Henrik Gregersen was invited to speak here last month on The Role of Thought Experiments in Science, and Religion. He made the argument that thought experiments are used in similar ways in science and Christianity.

The main enterprise of science is to develop models that help us to understand processes. The theologian and physicist Ian Barbour defines a model as ‘an imaginative tool for ordering experiences’. So imagination is at the heart of the scientific endeavour. Thought experiments go one step further in that they use the imagination to test those models. So how can this doubly imaginative endeavour be useful to science?

Thought experiments create a theoretical world by combining visual imagination and a narrative plot. For example, Schrödinger’s cat is locked in a box with a vial of poison that will be released when a radioactive atom decays. Common sense observations are used. When the atom decays the cat will die. Counterfactuals are invoked. Either the atom will decay or it will not. And the result of the experiment? Is the cat now alive or dead? Reality is questioned: if the Copenhagen interpretation of quantum mechanics is correct, the cat is simultaneously alive and dead until you look in the box. When you lift the lid reality collapses into one possibility or the other, and you discover a cat that is either dead and radioactive or alive and distressed. No one said thought experiments had to be nice.

Schrödinger’s cat was a critical or destructive thought experiment, devised to show that quantum mechanics is counterintuitive. Subsequent lab-based experiments have shown that smaller objects than cats actually do experience ‘quantum entanglement’ and exists temporarily in two states. So the imaginary cat-in-a-box was important in prompting scientific enquiry, and theoretical physicists continue to use this type of mental gymnastics as part of their work.

In philosophy, thought experiments are used to show something about reality that was previously hidden to us. They are critical in order to be revealing. For example, John Searle’s ‘Chinese room‘ (an English speaker uses a series of rules in order to ‘speak’ Mandarin) demonstrates that the mind is more than a processor, and meaning is lost if understanding is removed. Wisdom traditions are similar. In Daoism there is a famous conversation about the enjoyment of fishes that demonstrates the subjectivity of our own experience: we can never know what someone else feels.

Finally, we come to Christianity and realise that Jesus used thought experiments too. For example, in the book of Luke he asks, ‘Which of you fathers, if your son asks for a fish, will give him a snake instead?’ Christian theologians have continued this tradition, addressing issues as disparate as the incarnation and extra terrestrial intelligence. For example, imagine that we are alone, and salvation is for us alone. Then imagine that we are not alone: that a less superior civilisation exists. Could faith handle that situation? Perhaps, because it’s not threatening. But then imagine we are not alone, and the other civilisation is more sophisticated than us. What if they were evil? Or what if they were more virtuous? What if they were more intelligent and virtuous, but had no religion? This series of imaginary experiments helps us to think the problem through to its logical endpoint.

I appreciated Gregersen’s seminar, and it helped me to realise that stories about people that challenge and provoke are a kind of thought experiment. That Jesus chose to teach this way is interesting – it shows that imagination is as important in theology as it is in science. In the end, Christianity can be seen as a similar series of nested thought experiments: