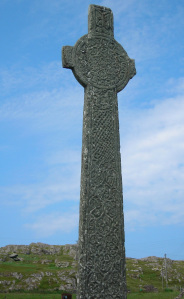 I have often written here about aesthetics in science, and recently I’ve been exploring the same theme in theology. I’ve been reading Richard Viladesau’s Theological Aesthetics: God in Imagination, Beauty and Art, and trying to understand the contribution of theologian Hans Urs von Balthasar to this area. Balthasar is most famous for his work on aesthetics, and his multivolume work ‘The Glory of God’ has been hugely influential for both Catholic and Protestant theologians.

Aesthetics is a relatively new term, coined by German philosopher Alexander Gottleib Baumgarten in the 1750s. The goal was to develop a ‘science of cognition by the senses’, and beauty was the ‘perfection of sensitive cognition’. This way of thinking was adopted by other Enlightenment thinkers, with the result that aesthetics was separated from the fields of logic and ethics – something that Balthasar lamented. If beauty is no longer connected to usefulness or the life of the mind, it becomes only a product to be consumed. It’s time to redress the balance.

The first area of aesthetics that’s relevant here is the aesthetics of theology itself. Karl Barth, who was a significant influence on Balthasar, was big on the beauty of theology.

theology…is the most beautiful of all the sciences. To find the sciences distasteful is the mark of the Philistine. It is an extreme form of Philistinism to find…theology distasteful. The theologian who has no joy in his work is not a theologian at all. Sulky faces, morose thoughts and boring ways of speaking are intolerable in this science. May God deliver us from what the Catholic Church reckons one of the seven sins of the monk – taedium – in respect of the great spiritual truths with which theology has to do.

For theologians looking at art, an area more traditionally connected with aesthetics, there are lessons to be learned. Art is a way to communicate things that cannot be said with words, and is therefore a particularly useful medium to convey religious feeling. Perhaps art provides its own ‘points of access to the holy’?

What does the beauty of God mean? Perhaps the next best word is ‘glory’. Barth thought that to explain God’s glory you needed both the concepts of power and of beauty, but he considered beauty to be secondary to glory (he was worried about nature-worship). Balthasar, on the other hand, went beyond Barth’s cautious handling of glory. He was concerned not just to restore a sense of the ‘inner beauty of theology and revelation itself’, but also to ‘probe the possibility of there being a genuine relationship between theological beauty and the beauty of the world’. Balthasar spoke of beauty as an analogy of God, with Jesus as the primary example of that beauty.

The ‘glorious’ corresponds on the theological plane to what the transcendental ‘beautiful’ is on the philosophical plane.

What does this mean for natural theology? A brief sketch cannot do justice to a very complex area of theology, but I think that it’s important to recognise that, for Christians, the beauty of God is reflected in the beauty of the world. If that isn’t an incentive to do science I don’t know what is!