The World Cries Out 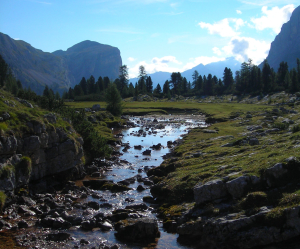 Let your mind roam through the whole creation; everywhere the created world will cry out to you: ‘God made me.’ Whatever pleases you in a work of art brings to your mind the artist who wrought it; much more, when you survey the universe, does the consideration of it evoke praise for its Maker. You look on the heavens; they are God’s great work. You behold the earth; God made its numbers of seeds, its varieties of plants, its multitudes of animals. Go round the heavens again and back to the earth, leave out nothing; on all sides everything cries out to you of its Author; nay the very forms of created things are as it were the voices with which they praise their creator.

This quote is from Augustine of Hippo, a theologian who lived in the fourth and fifth centuries.  I like it because it comes across as such a heartfelt outburst of praise, and it expands my view of the universe. It sounds so contemporary to me, although my own understanding of what it means to learn about God from nature is a bit different to his. I can also imagine it being very useful for a sermon on Psalm 8!

Science and science education have helped me to appreciate Augustine’s enthusiasm for creation even more. I can imagine circling the globe and landing in a remote place to watch for glimpses of wildlife. Then I launch myself into space and see the stars and galaxies, some of which are billions of light years away. I circle the planets, and look for life on Jupiter’s moons. Coming back to earth, I see huge oceans full of life.

I watched an old documentary by the pioneering scuba diver and filmmaker Jacques Cousteau a couple of weeks ago. It was about a trip to the Antarctic, and the underwater footage was stunning. It captured the unexpected richness of life in a place we ourselves would find quite inhospitable: penguins, seals and other large mammals, fish, coral, sea anemones and star fish – all living in close proximity to massive sheets of ice. The divers went right through and under a huge iceberg, and saw the most beautiful clusters of ice crystals – a cathedral of ice.

Of course, plenty of people study nature and come to different conclusions. No one is going to see nature and learn about Jesus. For some, though, it raises questions about meaning and purpose. I believe that what we see here makes the most sense in the light of theology. If God existed, what would you expect? A great and fertile planet full of diverse life? People in it with the ability to contemplate their lives, hear from God, and make decisions about how to live?

Now that I have discovered God in other ways, I can go back to what I know about biology and see what he has made. Augustine described this process when he wrote, “Let him who sees [creation], either in part, or through a mirror, or in an obscure manner, rejoice that he knows God, and let him honour Him as God and give thanks.”

Augustine’s contemporary, Basil of Caesarea, also said that “Truly, it is not possible to attain a worthy view of the God of the universe from these things, but to be led on by them, as also by each of the tiniest of plants and animals to some slight and faint impression of Him.” That, for me, is natural theology.