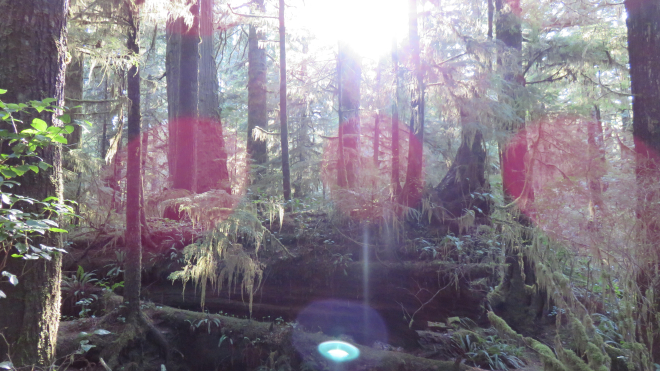 This spring, I experienced old-growth forest for the first time. I’m not sure that we have such undisturbed woodlands left in the UK[1], but on a visit to Vancouver Island I saw the most incredible temperate rainforest that made recent tree plantations look completely and utterly sterile. Owing to the relatively mild, wet climate of British Columbia, mosses and ferns cover nearly every available surface, and the undergrowth is close to impenetrable.

The dominant tree in these forests is the red cedar, and their massive height means that much of the light is blocked out from the forest floor, even on the sunniest days. The soil is relatively thin, so new trees grow on the rotting remains of fallen ones, resulting in a thick tangle of trunks and branches. The rain also means that any bare ground can rapidly become deep mud, so we were glad of the boardwalks along many of the trails. 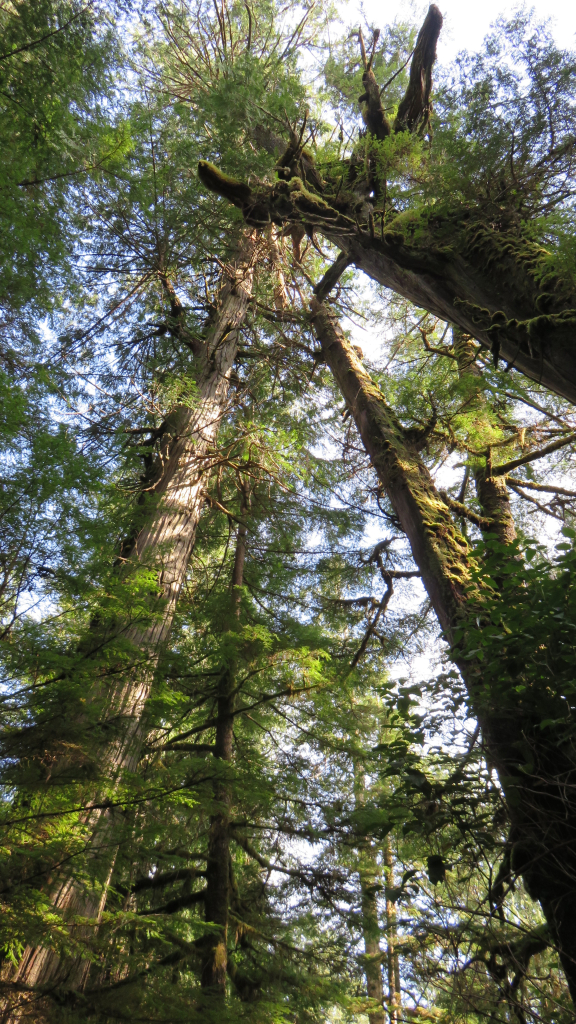 At Tofino and Ucluelet, and again on Mears Island, we saw a handful of cedars that are likely to be older than Cambridge University. At an estimated 1,000-1,500 years, they are some of the oldest life forms on earth. These ancient trees are hugely significant for the indigenous people of Vancouver Island, on a cultural level as well as practically for their roots, bark and wood – which are usually harvested without felling.

After seeing these great forests, I was fascinated when I came across the work of Professor Suzanne Simard of the University of British Columbia while researching my recent post, The Intelligence of Plants. Simard and her team have been working to understand the underground webs of white and yellow fungi that criss-cross the forest floor, and I wanted to look into her work further.[2]

Ninety per cent of plants connect with fungi as a normal part of their growth. These interactions, called mycorrhiza, provide energy for the fungus and extra nutrients and water for the plant. Mushrooms are the above-ground fruiting bodies of these fungi, and a sign of a thriving ecosystem. About ten per cent of plants (mainly trees) form ectomycorrhiza, where the fungus makes a sheath around and actually grows into the root.

Simard studies the ways in which fungi can go one step further, and actually link trees together. There are even some similarities between these interconnected forests species and our own online social networks.

In human communities, more established or active individuals can act as hubs for much of the social activity, while others link into them and are drawn into the conversation. Likewise, in the forest networks that Simard studies, there is evidence that larger trees like 1,000 year old cedars I saw in Canada (sometimes known as ‘mother trees’) act as resource-sharing hubs that are vital for the health of the whole forest. 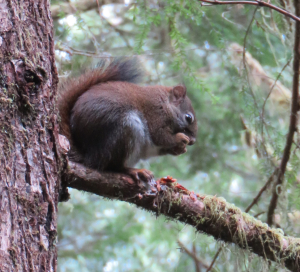 In times of drought, these more mature trees can use the fungal network to share vital nutrients with smaller more fragile ones. They can also support the growth of seedlings until they are tall enough to reach above the shady forest floor and make their own nutrients more effectively. Being too near the mother tree is detrimental, I expect because it needs a lot of water and nutrients to survive, but if saplings grow within a few metres away, they can connect into the established fungal network and flourish. Hub trees seem to preferentially send help to others of the same species, but different species can also share resources. At certain times of the year the balance of nutrient sharing can shift in favour of the most vulnerable trees. This network may well contribute to the resilience of the forest community, and improve diversity.

I learned about mycorrhiza a long time ago, but I find this new information about the complexity of the relationships between plants and fungi quite compelling. It seems almost too good to be true, but the data come from multiple studies carried out by different research groups, and on different types of trees. Time will tell, but this field might prove to be very significant.

Competition was once thought to be the major factor in the development of plant communities, but this new research changes that picture. In an online interview, Simard said, ‘These trees are not individuals in the sense that Darwin thought they were individuals, competing for survival of the fittest. In fact, they’re interacting with each other trying to help each other survive’. So we’re back to reassessing the role of cooperation in biology, which is rapidly becoming an important theme on this blog. 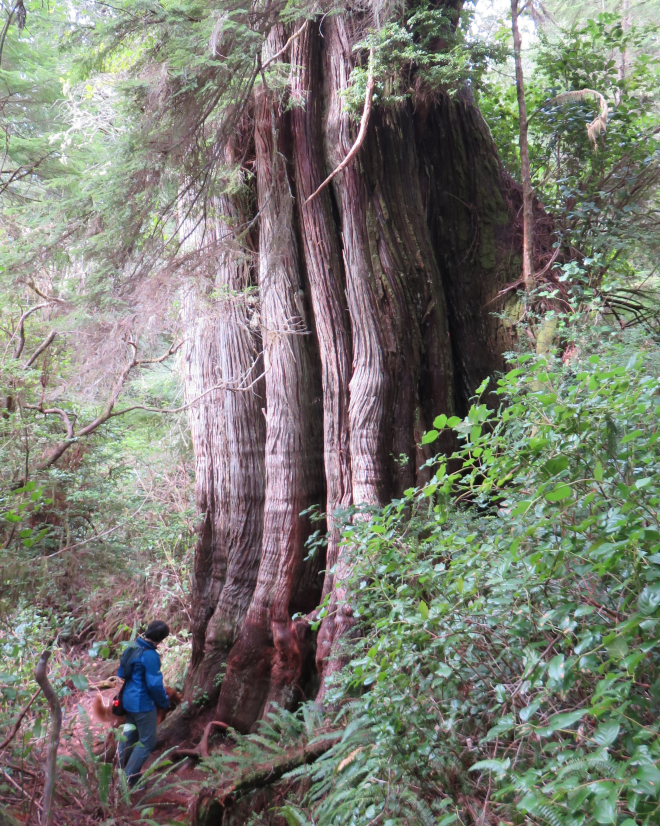 At the most basic level, there is commercial value in this knowledge. When organisms cannot move, they come up with some very ingenious ways to survive – and we ignore them at our cost. If this research is correct, then clear-cutting whole forests makes no sense. If the hub trees are left standing, with the ground as undisturbed as possible, newly planted saplings should thrive far more than expected using traditional methods.

These highly cooperative, communicative networks of living things are also a lesson in themselves. Surely there is an intrinsic value in just knowing that such things exist? It’s also an argument for leaving as much old growth forest intact as possible, given the huge amount of time it would take for these complex systems to regenerate. If all creation praises God, this is another way in which we can enable it to continue to do that. I look forward to seeing where this field goes in the future, and how the knowledge is applied.

[1] Except perhaps parts of the Forest of Dean

[2] Many thanks to Cara Daneel for the research behind this piece.