The Vocation of Robert Boyle 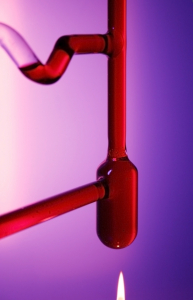 Robert Boyle was a great experimental scientist, still famous for his ‘law’ about the behaviour of gases, and yet he wrote as much about theology as he did about science. Boyle was fifteen years older than Isaac Newton, and he developed many of the laboratory techniques we still use today, including scrupulous note-taking and writing methods sections in scientific publications so that others can repeat the work. He contributed much to modern chemistry, but he was also a pioneer of science-religion dialogue.

Edward Davis spoke about Boyle, his religious life, attitudes and vocation at last week’s Faraday Institute summer course. The video and mp3 of his lecture and the other lectures at the course will be appearing on the Faraday website over the next few weeks. Two newcomers to Faraday who are also well worth listening to are Noreen Herzfeld on ‘Are Humans Computers?’ and Russell Cowburn on ‘Nanotechnology, Ethics and Religion’.

Davis’ lecture on Boyle was a fascinating insight into the life of a very unique man. Boyle was the seventh son of one of the wealthiest men in the British Isles. His siblings (he had 13) were married off to powerful allies, and Boyle narrowly escaped the same fate. Along with two of his sisters, he discovered a deeper form of Christianity than the one he had been taught as a child. So while his other brothers and sisters were living the courtly life, he developed a strong sense of vocation – at first for writing, and then for science. He believed that even those wealthy enough to support themselves must work, saying that

‘He is but an useless wasteful Droane, and unworthy of the benefits of Humane Society; whose endeavors in som honest particular Calling, do not som way or other Cooperate (and contribute) to the Good of the Common-welth.’

Strong words, for one so well connected! After an educational tour of Europe, Boyle began to write religious books. He tried a variety of styles, even attempting a novel that was later set to music by the composer Handel. He then turned to science, and a very practical form of it: he wanted to improve the human condition.

Boyle published reams of empirical data, leaving others to formulate mathematical theories around them. His methods were so well described that his books were much sought after, and often pirated around the world. He maintained his drive towards practicality throughout his life, and published a collection of recipes for medical treatments so that others could share the benefits of his work. His longest piece of writing was on the usefulness of science (or natural philosophy, as it was called then) – a point that was not obvious to others in the early years of science.

Boyle always saw his work in theological terms. According to his most recent biographer, the most important influence in his life and work was his Christian faith. Boyle rejected the personification of nature, and called it the ‘Vulgarly received notion of nature’. He believed that God made the universe to his own designs, and that led him to science – who are we to assume how the world works without examining it? He also believed that science is character-forming, teaching the scientist humility, pursuit of truth over personal gain, and the value of openness and generosity rather than secrecy. Despite wrestling with doubt throughout his life – an experience he thought was necessary to developing faith – Boyle remained convinced that faith and science went hand in hand.