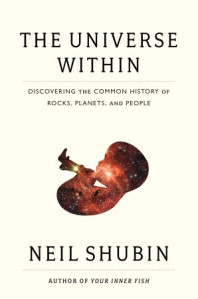 I often mention the wonders of scientific discovery, but sharing one’s latest finding with a wider audience is difficult. Even the clearest analysis needs a huge amount of translating before anyone outside of the field, let alone a non-scientist, can appreciate it. I recently read The Universe Within, a book that succeeded in getting me genuinely excited about geology, which is a rare feat (apologies to geologists, I just lack the necessary training!) It also got me thinking about human history.

Neil Shubin is a paleontologist who’s fascinated by the deep history of the planet. The main narrative of the book centres on the origin of the universe and our place in it, with a good dose of geology on the way. Each chapter is a story of exploration and discovery, introducing the main—and often colourful—characters involved, and ends by showing what the cosmic or global upheavals described have to do with us. The overall message is that we, our bodies, and everything about them that makes us human, are the products of processes that started when time itself began.

Shubin is a fantastic teacher, and he tells a good story, using intrigue and suspense to carry the reader along. I laughed at the stories of field trip misadventures and “innovative” experiments with frogs. The appendix even includes a link to recipes that satisfy Arctic campers, but are also perfect for serving to “company you never wish to see again.” I particularly enjoyed the chapters on the discovery of continental drift (currently 1.5cm/year) and the carbon cycle. (If my summaries sound dry, the chapters are not.

There were quite a number of “wow” moments for me as I read this book, even when I was already familiar with the science that was being explained. Most of the starlight we see at night was emitted before the first humans walked the earth, and it has taken many thousands of years to travel the huge distance to earth—that’s how big the universe is. It was 300,000 years after the Big Bang before the first true atoms formed. Continental drift caused the planet to cool, and the body clock operates on a 24-hour cycle even when we don’t see the Sun.

Through reading The Universe Within, I gained a deeper insight into the timescales by which God works. It was worth waiting hundreds of thousands of years for atoms more complex than lithium, and two billion years of single-cell life was for a reason. Any Christian knows that God almost never works by quick fixes, and creation is the ultimate example of how he is happy to work on long timescales. Somehow all this beauty, diversity, and fecundity but also pain, death, and violence, were all part of God’s good world—fit for his purpose. The Garden of Eden was to be subdued, and that is what we have done, though we have made some gigantic mistakes on the way.

I am humbled by the fact that we are different to other animals not because of our own cleverness but as a result of forces (sustained by God) that shaped us over millions of years. Shubin’s book has helped me to realise just how extraordinary the development of human life was. Any number of factors could have changed the course of history and eradicated our ancestors, but here we are. I felt something similar when I saw the human evolution exhibit at the Smithsonian museum. I’m proud to be human, but I know that I’m here by grace.

This review by Ruth Bancewicz was originally published by Books & Culture, and is reposted here with permission.