The Theologian and the Telescope 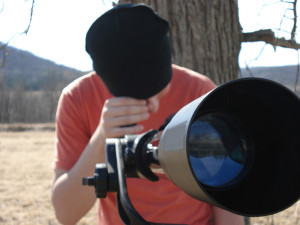 The main purpose of this blog can be illustrated by a single story: that of the theologian and the telescope. The theologian is a colleague from another department in Cambridge, and the telescope belonged to some friends of his. As we talked over lunch one day he mentioned that he and his family had visited these friends the previous evening. It had been a clear night, so they spent part of the evening looking at the stars. My colleague was an avid amateur astronomer as a teenager, but over the years he had lost his love for science. He had been involved in abstract discussions about science and religion for so long that he had forgotten that the experience of science itself can foster awe, wonder and – for people of faith – worship. His recent experience with the telescope reminded him how beautiful and fascinating the universe is. He rediscovered his love for science.

The joy of science is the freedom to wonder and ask questions – to exercise imagination and curiosity. It is also the joy of discovering new things, the shock of awe at what is found, and an enjoyment of its beauty. The theologian Austin Farrer said that a scientist may experience ‘constant amazement at the mysterious nature which the world must be supposed to have in itself, so as to be the sort of world which yields such complex and ordered responses to his yardstick method. But this amazement, this almost religious awe, does not find direct expression in his scientific activity; in so far as he entertains such feelings, he is more of a metaphysician than a pure scientist. That is only another way of saying, that as well as being a scientist he is a man; and indeed, most scientists are human.‘[1]

This blog, and the book that I’m also writing, is about the conversations that happen when science meets spirituality. This encounter with ‘the transcendent’ happens both in and outside of the lab. It’s also about the human side of science: what drives and motivates us, and what we enjoy. My own experience as a Christian has impressed on me the importance of reminding people of faith how exciting science is and helping them to enjoy it. My experience as a scientist and a professional in the field of science and religion has shown me that many scientists appreciate what one might call the spirituality of science. My aim is to combine both experiences in a way that helps people to have a fruitful dialogue about the subjects that matter to them. Hopefully it’s the beginning of a very interesting conversation.