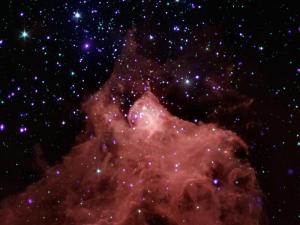 Great are the works of the Lord, studied by all who delight in them. Psalm 111: 2

I’ve already told the story of how the second verse of this psalm came to be on the door of both the old and new Cavendish laboratories in Cambridge. James Clark Maxwell’s successor as Cavendish Professor of Experimental Physics was the Nobel Prize-winning Lord Rayleigh. Rayleigh was also a Christian, and he had the famous verse printed on the front of each volume of his collected papers. Geneticist R.J. Berry writes in the journal Science & Christian Belief that Psalm 111 demonstrates wisdom rooted in the study of reality. If verse two is the scientists (and artist’s) charter, it needs to be balanced by verse ten.

The fear of the Lord is the beginning of wisdom; all those who practice it have a good understanding. Psalm 111: 10

God’s provision comes on God’s terms. In other words, the correct response to a study of nature is ‘reverence mingled with delight, gratitude and trust’. This psalm also demonstrates that wisdom is best shared in community: scientists should communicate their findings so that others can ‘delight in them’ too.

I will give thanks to the Lord with my whole heart, in the company of the upright, in the congregation.

Finally, there is a seamless relationship between history and science. God’s creation, his generous provision and his interaction with us are all part of the same story. As Berry has said:

We are here for God’s purposes, on God’s terms and in (and for) his world. For Christians, science should be both a religious activity and an intellectual discipline.

Johannes Kepler may have had Psalm 111 in mind when he wrote his now famous prayer, which came at the end of one of his scientific works:

If I have been enticed into brashness by the wonderful beauty of your works, or if I have loved my own glory among men, while advancing in work destined for your glory, gently and mercifully pardon me; and finally, deign graciously to cause that these demonstrations may lead to your glory and to the salvation of souls, and nowhere be an obstacle to that. Amen.