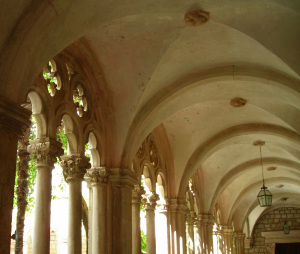 For Christians, science can enhance our worship, both individual and collective. CS Lewis wrote that worship completes our enjoyment of something,[i] and enjoyment of creation has always played a part in fostering worship. Monasteries and retreat houses often include open spaces or gardens where people can draw near to God through being surrounded by nature, and church buildings and cathedrals often contain natural motifs.

The Psalms are very early examples of worship songs that express joy at the glory of creation. In other parts of the Bible the immensity and grandeur of creation is also used to invoke a feeling of awe and worship. Perhaps the most powerful expression of this is found in the book of Job. In the last few chapters, God describes the great sweep of his works in nature. We now understand some parts of the processes described – the formation of Earth, weather and animal behaviour, for example – but the whole is just as awesome as it was thousands of years ago. ‘And these are but the outer fringe of his works; how faint the whisper we hear of him! Who then can understand the thunder of his power?’ (Job 26:14) The Chief Scientific Officer of the Hubble telescope is Dr Jennifer Wiseman, who featured in a recent blog has written that ‘Our worship of the Risen Christ should…acknowledge not only His victory over sin and death but also His Lordship over all time and space. In this way, scientific discovery can lift the minds and hearts of believers to a deeper level of awe and reverence for the King of Kings and Lord of Lords who is also Lord of all creation.’

The songwriter Matt Redman has written that in church we sometimes ‘take the extraordinary revelation of God and somehow manage to make Him sound completely ordinary’.[ii] But the glory of creation inspires great art and science, which in turn help us to appreciate that glory and articulate our praise.[iii] Science has the power to expand our horizons and helps us to see how great God is. Again Redman says, ‘The highest mountain peaks and the deepest canyon depths are just tiny echoes of His proclaimed greatness. And the brightest stars above, only the faintest emblems of the full measure of His glory.’

Of course worship is not limited to songs. Collective worship can also be practical. We worship God by exploring creation to the full, using all of our faculties and the tools of science, art and technology. In his recent book Song of a Scientist, environmental scientist Calvin DeWitt describes how Christians sing from two books: the book of God’s creation and the book of his revelation, the Bible. The early church absorbed a little too much of the Greek philosophy of their secular neighbours, and sometimes thought of material things as ‘less spiritual’, but the earth that God made was declared ‘good’, and all creation praises God together.

In the past people had a strong sense of humankind as being God’s creatures, alongside the other creatures he had created. Psalm 148 is a vivid description of this: ‘Praise the Lord from the earth…you mountains and all hills…wild animals and all cattle…young men and women, old men and children.’ More recently we have lost sight of our creatureliness, and lost a dimension of worship along with it. The theologian Richard Bauckham has written that ‘The best way to learn to value other creatures is to learn to worship with them.’ Other creatures praise God by being themselves, and by preserving wilderness areas and other natural habitats, we allow them to do that fully. We do not help other creatures to praise God, but they help us: ‘Coming to appreciate the value they have for God raises our hearts and minds in praise to their Creator.’

This post is an extract from an article that was first published in Third Way magazine (April 2013), and is reprinted here with permission.
[i] C.S. Lewis, “A Word About Praising” in Reflections on the Psalms (New York: Harcourt, 1986), p90-98
[ii] Matt Redman, Facedown (Eastbourne: Survivor, 2004), page 29
[iii] Daniel W. Hardy & David F. Ford, Praising and Knowing God (Philadelphia: The Westminster Press, 1985)