The Emergence of Human Consciousness 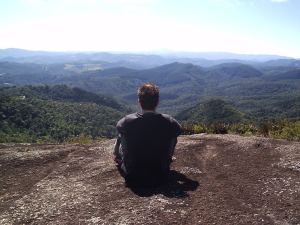 Why do we ascribe dignity and moral worth to human beings? At least part of the reason is because we can see beyond our physical makeup to qualities such as consciousness and the ability to make decisions. We are fantastically complicated biological systems, but we are more than our molecules: we are persons, and our conscious experiences are wonderfully real.

Last week the philosopher Tim O’Connor spoke at the Faraday Institute on The Emergence of Human Persons. Emergence is a fascinating area of research, and a controversial one. Although emergence is a philosophical argument, it has important implications for science.

O’Connor began his seminar by explaining where the idea of emergence came from. A group of British philosophers in the late nineteenth and early twentieth century sought a middle path between the extreme reductionism of some and body-soul dualism of others. Why? Strong reductionism is the claim that we are nothing but atoms and molecules – a philosophy that most people would reject. Dualism is the idea that we have a separate disembodied soul that somehow interacts with the body. This has been thought to be part of Christian orthodoxy for centuries, but a number of theologians and Christian neurologists have pointed out that it is a Greek idea that’s been wrongly ‘baptised’ into Christian theology.

Apparently a more Biblical idea is that our bodies are important and that our souls are part of our physical person, not a separate spiritual entity waiting to float off at a moment’s notice. So these philosophers proposed the idea that our human personhood – our soul – is a higher property that emerges when our bodies develop in all their complexity. This makes sense in the light of both the Hebrew notion of the soul/body and physical resurrection in the Bible, and the data that modern neurology has produced in the last few decades. Our personalities, thoughts and emotions are rooted in the physical stuff of our brains.

Unfortunately the early version of emergence was rather vague, and quickly lost popularity, but it is now enjoying a comeback. In the last twenty years a new group of philosophers has been exploring the idea of emergence and trying to define it more clearly – with some success. The idea is that while the atoms that make up our bodies determine how we are in some way, there are effects going in the other direction as well. The behaviour of my organs has an impact on the molecules they’re made of, the things I eat affect my body, and the choices I make affect the wiring of my brain. Properties emerge from the different parts of my body that are not determined solely by the properties of atoms, and one of these properties is consciousness. It’s still a disputed concept but a growing number of theologians are beginning to accept it.

Many scientists have assumed a reductionist position for so long that the idea of emergence is too controversial. But notice what I said: ‘assumed’. O’Conner made the point that philosophers are interested not in how the world matches up to our latest theories, but in what is actually the case.  Scientists should display a similar level of open mindedness, but at times it can be easy to hold onto pet theories. (And despite O’Connor’s optimism, I expect philosophers are often the same.) Perhaps it’s time allow space for a new paradigm? A number of scientists, including Bill Newsome and Harvey McMahon, have begun to study the way that higher properties affect lower-level systems. It will be interesting to see how this plays out – will more scientists begin to take emergent properties seriously?