The Art of Molecular Biology 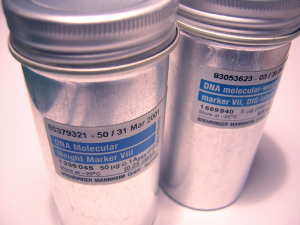 In Science, Faith and Creativity I explained how science can be creative, and that a Christian working in the sciences might see that as part of their relationship with God. Apart from a brief description in The Creativity of Chemistry, I haven’t yet given an example of what creative science looks like, so I will attempt to remedy that here. (This is a longer post than usual because I have included a basic explanation of molecular biology for the non biologist.)

I personally came to appreciate the creativity of science while studying genetics. Creative people generate ideas and make new things, and I discovered that lab-based research involves both of those activities. My favourite part of the genetics course at Aberdeen University was molecular biology: the study of DNA and proteins. I enjoyed the challenges of problem solving, lateral thinking and visual model making that were involved in exploring the micro-world of cells and molecules. I also appreciated that fact that we were learning about solutions to real-life issues.

Want to know why someone has an inherited disease? Study their family tree, work through a range of DNA tests in the lab and work out which genes are affected. Want to make large quantities of insulin for diabetic patients? Once you know which gene is responsible for making it you can purify human DNA – a blood or saliva sample will do – isolate the gene, insert it into bacterial or yeast cells, and find a way to harvest the insulin from the cells. Want to understand a particular kind of cancer? Compare DNA from healthy and diseased tissues to find which genes are affected. Molecular biology is easier in theory than in practice, but thanks to huge advances over the last few decades, learning the basics of lab-based molecular biology is now relatively straightforward.

Most things in molecular biology happen in little plastic tubes. Minuscule quantities of frighteningly expensive colourless liquids are added together in these tubes using a very accurate pipette. Some of these solutions might smell bad (though you shouldn’t really get close enough to find out), and most are unstable at room temperature so an ice bucket is an essential part of your equipment. Cycles of heating or cooling are often involved in the experiment, and perhaps the addition of further tiny quantities of colourless liquids. Sometimes the procedure is done in a sterile cabinet, and all the apparatus carefully wiped down with alcohol solution.

Doing this sort of biology feels a little like magic because the important ingredients – the DNA and proteins – are completely invisible most of the time. In the end the products of the reaction are analysed. You might separate different sized molecules using a method somewhat similar to the chromatography you did in school science lessons, but involving toxic chemicals and electricity. The results are then dramatically revealed, usually on a computer monitor or in a darkroom. If the process I have described sounds laborious, that’s because it is. It can take weeks to get an experiment working at all, and such tinkering is an essential part of the creativity of science. If you know what you’re looking for then it can be very exciting.

Let me explain some of the magic. The smallest components of matter (before things start getting complicated with particle physics) are atoms: hydrogen, oxygen, carbon, and all the others that are collected together in the periodic table. Join atoms together and you get molecules. Living things are made of organic molecules, which are made of carbon, hydrogen, oxygen and a number of other types of atom. DNA is a polymer: a very long molecule made by joining lots of smaller molecules together. The subunits of DNA are designated A,T, C and G.

These molecules are joined together to make the ladder-like structure of DNA, with each side made by joining together lots of A, T, C and Gs, and weak chemical bonds as the rungs. Each rung connects an A with a T, or a C with a G – no other pairing is allowed. So if you have the sequence of one side of the ladder you can predict the other. The human egg and sperm contain about 1m of DNA each, and when combined that makes 2m of DNA that is replicated in every cell of our bodies. That 2m is divided into 46 pieces, and those pieces are coiled up into chromosomes. The full set of chromosomes for any living organism is called their ‘genome’.

The beauty of the ladder shape of DNA is that the weak chemical bonds can be easily broken to split the ladder down the middle lengthways. Each side of the ladder can have a new side built onto it, and the resulting two ladders are each half old and half new. That’s how DNA is replicated in cells, though it needs many other specialised molecules to make the process happen. The other thing you can do when the ladder splits is to access the information it contains. DNA isn’t built by adding the four components in order, ATCG ATCG etc., but the letters spell out a code. Sections of this code – the genes – are read off by the cellular machinery and the templates made are used to make proteins. So for example, ctcgaggggc spells out the beginning of the insulin protein, and actcttctgg codes for part of haemoglobin, which is important in red blood cells.

This structure of DNA and the easy availability of purified cellular components are what make the art of molecular biology possible. The basic tools of the trade – the aforementioned frighteningly expensive colourless liquids – include solutions of A, T, C and G, and a number of enzymes. Enzymes are proteins that do a job like cutting DNA or making a new DNA chain. With these and a number of other bits of chemical kit one can cut DNA at specific points, extract the sections you need, join them together, make copies, and introduce mutations.

All of this work is done to understand how different genes work, why diseases happen, and how we can prevent them. For example, you might suspect that a certain gene is involved in the progression of a particular type of cancer. So to find out what it does you snip it out from human DNA, maybe in sections if it’s a long stretch of code. Then you snip a hole in a piece of yeast DNA, insert your gene of interest, and put the DNA back into yeast cells. If you’re lucky the yeast will start making your protein and you can purify it and begin to study it. If not, you’ll need to find out what went wrong and adapt your method.

Often isolating a whole gene is very complicated so it’s a work of real craftsmanship to identify the right bits, isolate the whole gene in a series of sections, and reassemble them in bacteria. Molecular biology can also have more direct medical applications, like the genetic testing or insulin production that I mentioned earlier.

One of my favourite experiments in molecular biology was by a Swiss biologist called Walter Gehring. He wanted to find to what a gene did so he inserted it into fruit fly DNA, next to the regulator for body appendages (legs, wings, antennae, etc) and put that DNA back into fruit flies. When all the appendages of the flies born from these transformed parents turned out to have eyes on them, it was obvious to Gehring that the gene he was interested in (called Pax6) was important for eye development. It was a bit gross, but this experiment was vital in helping us to understand the basis of human inherited eye disease. 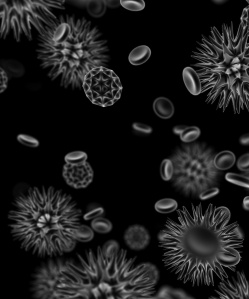 The true artists of molecular biology are the organisms themselves: the bacteria and viruses that use their tiny genomes to the max. I still remember the lecture when it was explained to us that some viruses use their genome in all three open reading frames. That will mean nothing to most readers, but just imagine that in order to solve a paper crisis a resourceful writer decides to write a book that contains three different stories.

Each page of the book contains a long stream of letters with no spaces in between. The first story begins with the first letter on the first page, and the beginning of each subsequent word is marked with a cross above the first letter of the word. The second story begins a few letters into the page and the beginning of each word is marked with a circle, so the words are completely different. The third story is indented further still, and the words marked with an asterisk. Such a book would be extremely difficult to read and virtually impossible to write, especially as punctuation would need to be omitted, but it would certainly use a lot less paper!

The genome of some viruses is written in this efficient way and it enables them to pack a lot of DNA into their tiny capsule-like bodies. In comparison to viruses, the human genome seems to be bloated to the point of wastefulness, equivalent to a book that’s only printed on every third page. There are advantages to our less economical approach, but the story of the efficient virus had me captivated. Molecular biologists get ideas from organisms like this, borrow their cellular tools, and are able to study the natural world at a level of detail that was undreamt of fifty years ago.