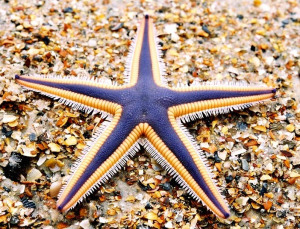 Why is there so much symmetry in the world? Sea urchins, jellyfish and other animals that sit still or float around gently have radial or rotational symmetry, so they look the same if they are rotated around a central axis. All other animals – the ones that move around – have bilateral or mirror-image symmetry.*

Flowers often have rotational symmetry, and most leaves have approximately bilateral symmetry. Five-fold symmetry is found in both plants (for an example, cut an apple in half across the core) and animals.

Symmetry can be seen in astronomy, and it is also important in chemistry – biological systems which use a specific molecule often cannot use its mirror-image. We find symmetry attractive, and people we think are good-looking tend to have very symmetrical faces.

So what lies at the root of these phenomena? In 1915 the German mathematician Amalie Emmy Noether (1882-1935) found a link between different types of symmetry and the laws of conservation in physics. Although Noether is not well-known, her work was foundational for much of modern physics. 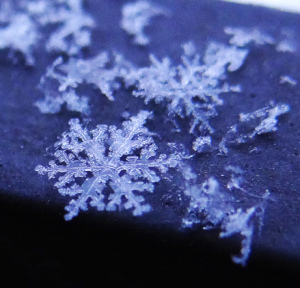 Let me give one example. Snowflakes have a complex and famously varied structure, but they all have six-fold or hexagonal rotational symmetry. This symmetry at a (relatively) large scale reflects symmetry at an atomic scale, which is determined in turn by symmetry in the basic laws of physics.

The properties of matter are described by physical laws: the strength of the forces in the atom, the behaviour of electrons, the strength of gravity and so on. It is possible to form symmetrical crystal lattices only because the laws of physics apply equally in any direction, time or place in space. Only decay over time (the second law of thermodynamics) is not symmetrical, so as snow melts, the crystal’s hexagonal shape is destroyed.

I have heard numerous lectures on the fine-tuning of the physical properties of the universe, but I have never yet heard anything on the topic of symmetry in a science-faith context. Apparently there is indeed a link between symmetry and fine-tuning – and I want to know how. Watch this space.

* There are a few exceptions to these rules. For example sponges have no symmetry, and some corals have bilateral symmetry. Some bilateral animals like flounders – develop asymmetries as adults.  Some may start with one sort of symmetry and develop another. And of course symmetry at this level is approximate – if you looked at a molecular level you would see asymmetrical differences.