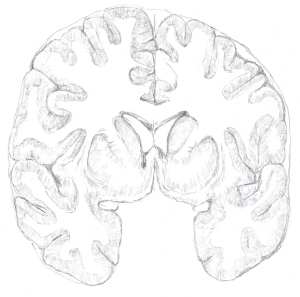 One thing I always try to do on this blog is explain what it’s actually like to do science: the fun parts, the challenges, and the mundane – in other words, the human side of science, and particularly biological science.  To back up my ramblings with some perspective from someone who’s spent longer in the lab than I did, I recently interviewed Harvey McMahon. He runs a very successful lab at the prestigious MRC Laboratory of Molecular Biology in Cambridge. McMahon studies the brain, and has spent time looking at the mechanisms behind the incredibly fast communication between brain cells, or neurones. He has also spoken at the Faraday Institute recently (see previous posts).

We get to hear about the discoveries of scientists in the news, but we don’t often get to find out how those discoveries are made. Like all professions, the every day is very unglamorous. In science there is more than enough interest and excitement to keep people coming back to work day after day, putting in the hours in the evenings and at weekends.

I was interested to find out McMahon’s views on science: what makes good research, what makes a good lab tick, and how is it possible to learn anything new in biology? What struck me most when I spoke to him is that he is quite surprised to be where he is. He was the first in his family to go to university, and only then because ‘a kind old lady’ (his words) persuaded his father that he needed to study, and offered to pay for his education. The brain seemed to be something people didn’t know very much about, so he decided to study neuroscience.

The other striking thing about McMahon is how much he likes doing experiments. As the head of a research group it would be normal practice to spend most of his time in the office or travelling to conferences and let others do the manual labour, but Harvey is much happier at the lab bench than he is in his office. It reminded me of Marie Curie’s statement about ‘that atmosphere of peace and meditation which is the true atmosphere of a laboratory’[1]. A molecular biology lab is not a peaceful place but Harvey assured me that he does his best thinking with a pipette, that all-purpose tool of molecular biology, in his hand.

In his book ‘Culture making’, Andy Crouch writes about the students he met when he was a campus minister at Harvard University, most of whom fell into one of three groups. The first he called the ‘strivers’, who had spent most of their lives preparing so they might have a chance of being admitted to Harvard. They scurried from library to lecture hall from morning till night, with bulging bags on their backs. They had no time for anything but study, and struggled with anxiety. The second were the ‘legacies’. These rather dominant students felt entitled, through family connections, fortune or fame, to stroll down the halls of Harvard, at home and at ease. Finally, comes the smallest group but the most fun to be around: the ‘children of grace’. They hadn’t thought they stood a chance of getting into a university like Harvard, but were delighted to be there. These fortunate few loved their studies and continued to be surprised and delighted as they progressed through university, finding the time to grow personally as well as learn.

I was reminded of Crouch’s ‘children of grace’ when I met Harvey. These contented students may have been blessed by academic brilliance, easy-going personalities, or by being exceptionally well suited to their studies, but they were certainly aware of their ‘good luck’ in finding themselves at Harvard and were going to make the most of every opportunity. I have observed the same among scientists like McMahon. Often the ones who tend to stick with science as a career and do well in it are the ones who can’t believe anyone would pay them to do something so fun as play around in a lab. They’re surprised to have made it so far, and plan to keep going as long as they can. Crouch concludes that the most important cultural contributions – including science – come from those who receive opportunity as a gift, and do whatever keeps them in the centre of delight and surprise.