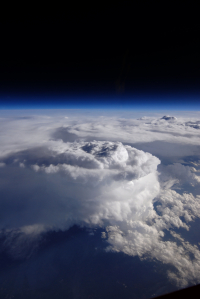 I spent last weekend at Lee Abbey, Devon. The theme of the weekend was ‘Science & Faith in a Secular Age’, with the Exeter-based molecular biologist John Bryant as the main speaker (I managed to sneak in as a workshop leader). We spent most of Saturday morning thinking about how science has been misused to further a secularist agenda, and how much more awe inspiring the real picture is – using Job 38 and John 1 as a basis for that reflection.

What struck me in particular was the warden David Rowe’s talk on Sunday. He started from the same Bible passages and asked, ‘How does God manage to communicate with us without obliterating us?’. If God created on the scale of the universe, how could he possibly be in the room with us without turning us into dust and ashes?

David showed the picture Christ before the High Priest by Gerrit van Honthorst. It captures beautifully what it took for God to communicate with us. You can see the contrast between the assumed authority of the High Priest and Jesus’ real authority. We don’t use the word ‘meekness’ very often, but its original meaning was something like ‘strength, harnessed’. God’s power was all there, but he chose not to expose us to its full force. Jesus could have blasted the priest from here to kingdom come,  but he didn’t even waste time arguing. He knew why he was there: to display his love for everyone, including the man confronting him.

This reminds me of something Rosalind Picard sent me when I asked for pieces of writing to include in the Test of Faith book. She gave me this story:

I’ll never forget Dr Gordon Hugenberger talking about his meeting with one highly-educated intellectual who was discussing doing missions work for the church. The young professional suggested that his extensive education and (quite impressive) experience had made him over-qualified for simply serving others and spreading the news of Christianity. Dr Hugenberger thought for a moment and replied, ‘Over-qualified? Do you want to know who was really over-qualified for this work? Jesus was over-qualified.

To show how much of an understatement ‘over-qualified’ is you only have to look at John 1. Jesus created the universe, which he then visited in person.