Song of a Scientist 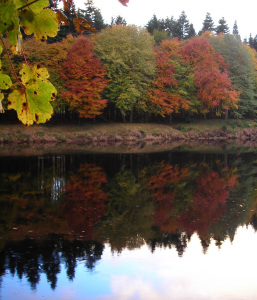 The well-known geneticist Francis Collins is in the habit of breaking into song on special occasions. The only other person I have known to sing during a science-faith presentation is environmental scientist Calvin (Cal) DeWitt. At the 2007 conference of Christians in Science and the ASA in Edinburgh, DeWitt concluded his talk by leading us all in song. You can hear it here (fast forward to the last 2 minutes, unless you want to hear the whole talk which is very good). It was a moving moment, and a significant one. Here was a scientist wearing his heart on his sleeve and expressing himself through art as well as scientific jargon.

I wasn’t at all surprised – though I was pleased – when DeWitt published a new book this year entitled ‘Song of a Scientist’. This ‘song’ is a weaving together of different stories: autobiographical, ecological, and ethical. The autobiographical story is of DeWitt’s life in science: some initial work in zoology, a switch to environmental science, and his part in making the Town of Dunn a sustainable development. Woven through this account are stories of animals, plants and whole ecosystems that sing their own song. The ethical part is what DeWitt does best; his knowledge of the natural world and its destruction is encyclopaedic, but he has also been involved in putting into action practical methods to care for the earth that are both sustainable and acceptable to its human inhabitants. This isn’t a hair-shirt way of living: it’s a living of life to the full in the most joyful way possible.

Cal DeWitt is an enthusiast, and completely absorbed by his work – so much so that he tells the story of when he was so entranced by the hippos in a zoo that he was locked in when it closed for the night and had to climb out over the wall. His science is driven by his theology, and he doesn’t treat the two as if they were completely separate disciplines: for him the relationship of creature to creator informs action. Perhaps that would be hard for a secular scientist to understand, but I think that DeWitt’s approach of complete transparency in motivation, and his enthusiasm for the subject in the context of his beliefs, are values that could be respected.

De Witt is also an admirer of John Muir, and rightly so, because he was a respected naturalist and heavily involved in establishing the US National Parks. Muir also wrote on the beauty and grandeur of the natural world, and has been hugely influential in nature writing as well as conservation. Though he had been brought up a Presbyterian, he preferred to experience God among the mountains, trees and glaciers that he studied. DeWitt’s theology is more traditional, but he shares Muir’s delight in his profession.

Though his book is essentially a series of stories, DeWitt packs in a good deal of information, and it is well referenced. This is one to put in the hand of a busy Christian who’s slightly sceptical about whether they should be bothered about caring for the planet, or a secular environmentalist who has not yet come across a coherent Christian perspective on the environment. I say ‘busy’ because this is not a demanding book – it would make good bedtime reading, and is both refreshing and inspiring.

Calvin DeWitt, Song of a Scientist