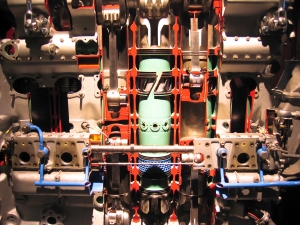 For most Christians working in science, their work helps them to worship. The theologian Alister McGrath has written a number of books about the relationship between science and Christianity, but he also stresses that our response to what we see in science should not simply be intellectual. A Christian view of nature should recognise the intuitive sense of awe and wonder that we have when we look at the natural world, and our increased awe as our scientific understanding grows.[1] Our response to those feelings is rational, emotional and active: worship as well as theology.[2]

How does a scientist worship? In her writing on wonder, the philosopher and cognitive scientist Margaret Boden captures the experience of a Christian scientist when she says that ‘awe is a high degree of wonder, in which fear and respect are prominent. And worship is a deliberate expression of awe’.[3] The dazzling intelligibility of the world increases our humility before an awesome God. Worship happens for a scientist when they turn that humility and awe towards God and thank him for the incredible universe he has made.

Scientific research itself can also be seen as an act of worship. Christians are encouraged to offer their work to God, and there is a long tradition of scientists doing this. The sixteenth century astronomer Johannes Kepler is a well-known example.[4] Kepler was something of a mystic, and his scientific work was directly informed by his faith. Science was not his original choice of vocation. He wrote in a letter to a friend that ‘I wanted to become a theologian; for a long time I was unhappy. Now, behold, God is praised by my work, even in astronomy.’

Kepler’s scientific writing was interspersed with theology, prayers and hymns. Christians in the sciences often use a prayer that comes at the end of his most famous work, The Harmony of the World, and is a beautiful expression of dedication to God. ‘If I have been enticed into brashness by the wonderful beauty of thy works, or if I have loved my own glory among men, while advancing in work destined for thy glory, gently and mercifully pardon me; and finally, deign graciously to cause that these demonstrations may lead to thy glory and to the salvation of souls, and nowhere be an obstacle to that. Amen.’

The composer Johann Sebastian Bach adopted the Jesuit tradition of writing J.J. (Jesu juva – Jesus help me) at the beginning of every piece of work, and S.D.G. (Soli Deo Gloria – glory to God alone) at the end. I know a physicist who was inspired to do the same in her laboratory notebooks and lecture notes: a tangible reminder of God’s hand in everything we do. Virtually every Christian scientist I interview is acutely aware that their work is an expression of their worship to God, and looks for similar ways to express that either privately or publicly. Science results in new technologies, and how those technologies are used and developed is also part of a Christian’s worship of God.[5] Revelation 21 describes how the ‘kings of the earth will bring their splendour’ into the city of God. Will that splendour include wonderful technologies, beautiful writing and fine craftsmanship? It’s both humbling and inspiring to think that work done now as an act of worship might last into eternity.