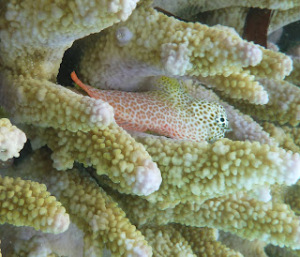 Over the summer I interviewed a number of scientists from different countries. The first of these interviews is with Bob Sluka, a marine conservation consultant and associate of the Faraday Institute from the US, now based in the UK and Kenya.

It’s amazing when you think that for most of human history, the only opportunity for people to see the majority of marine life was by pulling it up at the end of a line. Since the 1950s, when Jacques Cousteau and Emile Gagnan invented modern SCUBA, we have had an unprecedented opportunity to recognise the beauty in the ocean. I love scuba diving and I also enjoy science, so when I found out that I could get a degree in marine biology I thought, ‘this is fantastic!’ and became a coral reef fish ecologist.

During my PhD I studied grouper, which are fascinating fish. There are more than a hundred and sixty species globally, and a large percentage of them gather in a ‘spawning aggregation’, where they return to the same spot every year to breed en masse. A friend of mine did a tagging study, and one fish travelled over two hundred kilometres to spawn.

The spawning behaviour of grouper makes them particularly prone to over fishing. In the Caribbean the Nassau Grouper used to be the most important fish, but it’s now commercially extinct in a number of places. People know that around the time of a full moon at certain times of year and in very specific locations, huge numbers of fish will come together. Essentially the whole reproducing population of one species of fish from hundreds of kilometres around come together in one place, so you can fish out a huge area in a couple of nights. There now laws in many areas of the world protecting aggregations.

A large part of the reason why I chose to study marine biology, and why I still enjoy it now, is the sense of awe and wonder that I get when I study the ocean. One particular experience illustrates that in a very dramatic way.

As a PhD student I did a lot of scuba diving in the Bahamas. One of the areas we studied was a marine reserve in a beautiful little island chain called the Exuma Cays. Part of my research was to study whether this marine park was doing what it was supposed to be doing: was there any difference in the number of fish inside versus outside the park? In Exuma Cays the water is only about a hundred feet deep and crystal clear, so we could almost count the fish from the top of the boat. One day our job was to go out into deeper water and count the fish there. We swam through the reef to the edge where it drops straight down into a two thousand metre trench called the tongue of the ocean. Swimming off the reef felt like going over the edge of a cliff. We stayed there, hanging out in open water looking at the wall and trying to count fish.

When you’re out in deep water, it’s dark. So you’re looking over your shoulder every once in a while, and then you glance down and get that feeling… One time I looked down and there was a shape moving way below. I couldn’t really see what it was, so I kept an eye on it. I looked down again and noticed it was getting bigger and bigger. Suddenly something swam past me with the force of a jet. I looked up and right there was a huge barracuda. It was staring at me with its big eyes and big teeth. At first I was afraid because my dive buddy was a long way away, but then my training kicked in and I remembered that these guys don’t normally bite. My fear turned into awe, and I was able to enjoy sitting out in the ocean looking eye to eye with this beautiful creature. I thought, ‘This is something that I want to protect. This is something I enjoy, and it’s worth spending my time caring for it’.

For the people I know who get to do fieldwork and discover new species, what’s driving a lot of them is a sense of awe and wonder, and they feel privileged to be in that position. A friend of mine who studies frogs is always posting photographs on Facebook saying, ‘Look at this amazing frog!’ I think this beauty and wonder is a pointer from creation to something else. One of my friends from university studies alligators, and has his own show on the National Geographic channel. In all of his work there is a sense of ‘Wow, this is awesome!’ I think the same thing, and that directs me to a bigger reality.