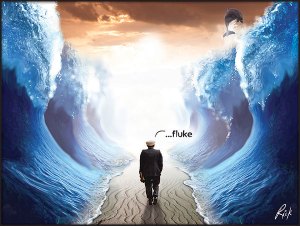 I’m a scientist who believes that miracles can happen. I don’t think I’m all that unusual. I could name a lot of other scientists who believe the same thing, and from time to time they make themselves known – as in this Nature article.

First of all, what’s a miracle? Miracles are signs of God’s particular grace to his people in particular circumstances. They are events that happen in response to prayer or a desire to connect with God. Their mechanism or timing defies normal scientific reasoning, and show us something special about God’s character. I think this is a Biblical definition of a miracle – a sign; a wonder; something that shows us how amazing God is and how much he loves us. And a miracle doesn’t HAVE to defy scientific explanation – some miracles are ‘ordinary’ events with incredible timing.

Why should a scientist believe in this sort of thing? Put quite simply, if God created the universe he can do what he likes with it! We know from experience that things in the universe can often be reduced to ordered, rational principles, like the ‘law’ of gravity, the speed of light, and so on. I believe that God sustains the universe: if he wasn’t there the whole thing would disappear. And God chooses to sustain things in an orderly way – so we get seasons, patterns and the ability to do science. But is God bound by these laws? I don’t think so! Why should he be? Occasionally he chooses to act in a different way: in a way that defies scientific explanation, and the resurrection of Jesus provides a powerful example – something that all Christians believe happened.

Going back to whether a scientific explanation can be found for a miracle, I think our desire to find stories that defy scientific explanation is a symptom of our scientific culture. If you want to say anything significant these days you need some sort of scientific evidence to back it up, and Christians often buy into this. This makes it extremely tempting to spend a lot of time justifying miracles – especially miracles of healing – as events that cannot be explained scientifically, and dismissing miracles that can be explained scientifically as nothing remarkable, when something very remarkable indeed has happened – someone prayed and God acted.

The Bible doesn’t differentiate between miracles that defy scientific explanation (like Jesus turning water into wine) and those that don’t (like the wind blowing all night and driving the waters of the red sea back – the picture in this cartoon I think overdramatises it a little, but it was nonetheless an incredibly remarkable event that etched itself on a whole nation’s consciousness for thousands of years afterwards) – both types of event are possible, and both are ‘signs and wonders’ pointing to God’s incredible power and care for us.

More importantly, Jesus recognised that miracles alone will do nothing to convince people that God is serious about caring for us. Miracles were an important part of Jesus’ ministry, and are still important today, but some of the people who watched Jesus heal person after person were the same people who cheered for his execution. And Jesus himself said that even if someone rises from the dead people still won’t believe if they don’t want to. It’s only within the whole picture of what Jesus came to do that miracles really make sense.