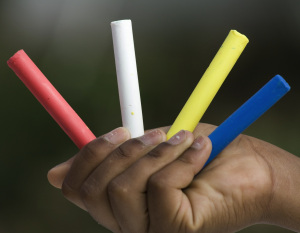 Scientists are creative people. When I began to work on this project I spoke to a number of Christians working in science about what they thought were the most positive parts of the science-faith dialogue. I had not considered creativity as an important factor in the discussion until I visited the University of Madison-Wisconsin and was introduced to some chemists.

Chemistry doesn’t throw up any burning issues for science and faith as other subjects do: no great ethical debates, no creation-evolution battles, no arguments about the ‘fine-tuning’ of the universe. I find that scientists who have been drawn into these battles often have ideas about things they would rather talk about. Most speak about beauty, awe and wonder, and that is why I have written so much about these topics. When I spoke to a couple of people in the Chemistry department at Madison, however, they both mentioned that they enjoyed the creative process of trying to make sense of things, or solve a problem.

It might be a surprise for some to read that scientists exercise creativity in their work, but when you think about it – why not? Creative thinking in science involves making links between things that have previously been unlinked. Nicolaus Copernicus thought it might be simpler to look at planetary orbits from the point of view of the Sun rather than Earth, and caused a revolution in the way we see the universe. A century later, Isaac Newton, sent home from university during an outbreak of bubonic plague, was left to think by himself. He wondered if the planets were affected by the same force as objects on earth, and came up with the concept of gravity. Michael Faraday tried linking the forces of electricity and magnetism in a search for new sources of power, and furthered the understanding of pretty much everything in science, including light, the behaviour of different chemicals, and the movement of anything you can see without needing a microscope.

Science is all about discovering these ‘hidden likenesses’, and so is art[1]. Pablo Picasso got the idea of drawing things using only simple geometric shapes, and invented Cubism. Claude Monet and his friends started painting everyday scenes in a particular style, and started the Impressionist movement. Technology fits this category too. A person of true genius tried attaching wheels to the short side of the suitcase, and one of our greatest transport problems was solved. When looking for the root of creativity, lateral thinking is a good place to start.

Of course there are differences between scientific research and other more overtly creative activities. Scientific output itself is not an art form. A scientist simply discovers things that are already there, though their presentation of the data might be pretty. Both science and art stem from careful observation of the world, and ‘a desire to see beyond the seen’, but the theories they produce are completely different. Science is about explaining the laws underlying the universe, while art is a more subjective and metaphorical expression of what is discovered[2].

The biologist E.O. Wilson said that both science and literature start with a story, but while science must say something that fits the data, literature uses ‘lies’ to say things that are true. Take the use of metaphor, for example. Science uses metaphor sparingly, and in a rather obvious way. There’s a protein (imaginatively named p53) that is very important in protecting the integrity of DNA, so it is called a ‘guardian of the genome’. Biologists also use the metaphor of a river to talk about the DNA code: if you are looking at a long section of DNA code laid out in a certain way, the left hand side is ‘upstream‘, and the right is ‘downstream’.

In the literary world, on the other hand, metaphor is used more widely – and the message is often more opaque. The stylised form of poetry gives a hint of something deeper in the words chosen. Most schoolchildren could figure out the meaning of Robert Frost’s ‘The Road Not Taken’, but that’s not always the case – sometimes we are left musing or puzzled, trying to understand the poet’s mind. Prose writers also use metaphor, and sometimes in an equally subtle way, so you could read a whole novel without picking up on some of its intended meaning. Are the lifeboat interactions of The Life of Pi a metaphorical exploration of questions about God, or the different levels in Indian society, or…? The creativity of both art and science is real, if expressed in different ways.

The Bible describes how God created us ‘in his own image’, brought us into relationship with himself and gave us responsibility to care for creation. It’s not too much of a stretch to assume that our creative drive is part of what it means to be made in the image of God. As Dorothy Sayers said, ‘The characteristic common to God and to man is apparently that: the desire and the ability to make things.’[3] Of course we create in a different way to God: we don’t make things out of nothing, but are inspired by and use materials from what we see around us. A scientific friend recently said that it’s hard for her to compare our creativity to God’s because the extent of that creativity is so different. There’s so much variety and diversity in what God has made that it’s difficult not to be bowled over by it. She agrees, though, that our creativity must be something to do with being made in his image. The desire to understand and look for new things is part of what makes us human.