Resource Review: Exploring the God Question: Science, God and the Search for Truth 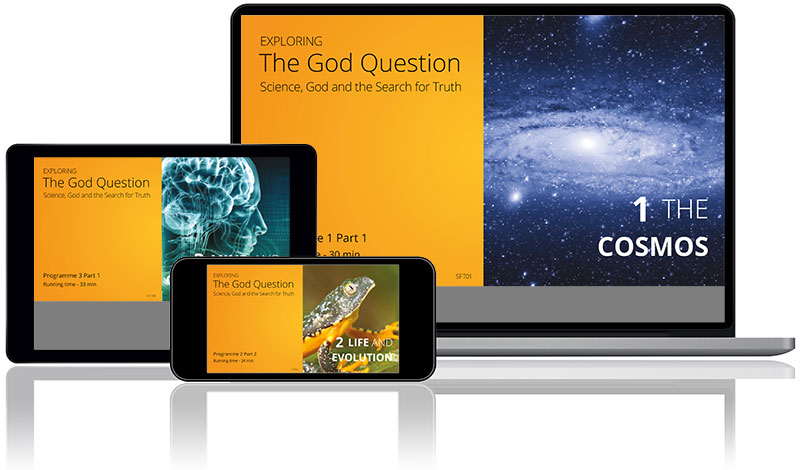 Exploring the God Question is a three part documentary with three bonus episodes (180 min total) and accompanying group study material that explores the scientific evidence for and against God. This is a high quality series made by Kharis Productions aimed at a wide audience, which challenges the viewers to decide for themselves whether God exists. A three-part version has also been produced for TV. The six part study version was released in 2013, and is reviewed here (DVD box set £36, group study pack £72).

Programme one, The Cosmos, presents the current science of the origins of the universe and debates whether the concept of a creator is necessary. It also covers the history of the relationship between science and faith. Part one sets the scene, while part two deals with the interpretation of Genesis and the appearance of fine-tuning in the universe

Programme two is called Life on Earth. Part one questions how life developed on Earth, and investigates the history of Darwin’s work and the church’s reaction to it. Three views are examined in part two: Atheist development of life, Theistic evolution and Intelligent Design. It looks at randomness, the origin of life, suffering and concordist views of Genesis.

Programme three is about Mind and Consciousness. Part one investigates higher consciousness, or the mind – as distinct from the brain, and spirituality. The question of why we believe is addressed, as well as morality. Part two is about personal experience of God, the ‘God spot’ theory, and near-death experiences.

This documentary is exciting because it brings together such a broad range of contributors and tries not to impose a conclusion on the viewer, exposing them to all sides of the debate. It is fast-paced, weaving together interview material with visuals, and should be useful as a teaching tool both in the classroom and for church groups. I appreciated the inclusion of artists and lay people as well as the usual science and religion experts. The study resources have been written by series producer Ian Morris.

There is very little to criticise about Exploring the God Question. The programme’s strength, however, might also be its weakness. Being introduced to more than fifty people in the space of three hours can feel a bit overwhelming at times. Colour coded theist/atheist/neutral labels are provided, but one is left wondering who believes what exactly, particularly when it comes to various viewpoints on the origin of life and evolution. Though the overall message that science and religion can complement each other is a very helpful one, part two is bound to be the most controversial because of its somewhat sympathetic portrayal of Intelligent Design.

I felt some important arguments were omitted from part 2.2, but overall, the series is a welcome addition to the collection of science-faith resources already out there.