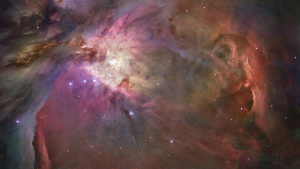 I recently got together with some scientists and theologians to study part of Job. The final few chapters (38-42) of this book are a description of God’s role in creating and sustaining the universe and everything in it: the Sun and stars, Earth and sea, weather and wild animals. Stars move in their courses, weather changes and animals behave in their different ways. We didn’t make any of these things ourselves [1] and we have very little control over them, even with today’s scientific knowledge.

But are we any less awe-struck because we now understand how some of these processes work? If so, how can we identify with the impact this passage must have had on people in the ancient Near East? What things on our planet or further out in the universe seem vast, powerful, fearful and awe-inspiring to us today? If Job was written today should it use different examples: natural processes we still don’t understand?

The overwhelming answer I received from the scientists around me was ‘No’. Thunder and lightening does not stop being impressive when you have studied physics. Being caught in a storm in the middle of the Atlantic is equally awe-inspiring, and can be even scarier if you understand the forces behind it and the consequences for your boat. There are still places where we feel small and vulnerable in a world of hugely powerful forces.

In a more positive vein, certain things may be understood by scientists but finding them out for yourself can be also an awe-inspiring experience. The geological time scale, the size of the universe, the beautiful photographs from the Hubble telescope and the incredible detail of the cell were all named as good places to start.

When it comes to thinking about the size of our solar system, scale models can help visualise the vast distances involved. If the sun is the size of a small melon, Earth is a peppercorn sitting 26 paces away. Mars is a pinhead another 14 paces away, and Jupiter a chestnut 95 paces from Mars. Pluto is a grain of sand almost a kilometre from the sun, and the cloud of space-dust that marks limit of our solar system is 3,200 miles away. The nearest star, Proxima Centauri, is another 3,200 miles beyond that. So if your sun-melon is in London, the next closest star is in Chicago. To find the actual scale of the universe, just multiply your pace by 3,600.

On a cellular scale, what about the energy-generators of the cell – the mitochondria? These tiny membranous bags contain molecules that can harness the chemical power of oxygen and use it to make a chemical called ATP that powers every process in your body. Though they live inside your cells, mitochondria contain their own DNA and replicate by growing and dividing in two – like a bacterium. Some cells contain just one mitochondrion, while other have thousands. On average, your body uses its own weight in ATP every single day! If I were an animal behaviourist or climate scientist I’m sure could tell similar amazing stories about the phenomena mentioned in the Bible.

So why does the Bible refer to such natural wonders? The closing chapters of Job help me to take a mental leap away from my own problems and put them in perspective. They are a reminder of who God is. There is order in the natural world and Christians believe that God is in control of it, despite the seemingly chaotic processes going on around us. Modern physics may have raised some uncertainties, but many processes are still predictable in principle. Through science we now have an even stronger idea of order and law in nature than the biblical authors did. So rather than diluting the message of Job, the discoveries of science simply strengthen it.

[1] Although we can alter them: taming animals and causing climate change, for example.