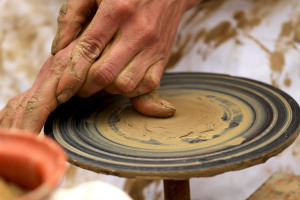 So far my writing about creativity has been very optimistic. But not everything we do is good. There are two ways of looking at human creativity: ‘sacramental’ and ‘dialectical’. In sacramental creativity we are seen as co-creators, because what we do continues God’s act of creation in the world. A dialectical view of creativity concentrates on the fact that human beings are not perfect: we do wrong, and as such are not capable of co-creating with God. What we make is always corrupted in some way. Only through re-creation can we create well, with God’s help.[1] I find the dialectical view more helpful, because it highlights both the responsibility and the vulnerability of being human.

Thomas Merton was concerned about the corruption of creativity in art. Though writing in the 1960’s, much of what he says is no doubt applicable to contemporary art in the 2010’s. The first part of his essay ‘Theology of Creativity’, describes how a modern artist can sometimes be elevated to a priestly role, producing work that is ugly or destructive, and self-centered to a point that it can only fully comprehended by the artist him or herself. Art that disregards all values is not art but self-display. Of course we could all point to examples of beautiful and meaningful art – certain paintings, books and documentaries spring to my mind – but I only need to look at my own output to know that creativity can at times go awry.

The second part of Merton’s essay is a call to truly creative activity that comes from the freedom that following Christ brings. Freedom in obedience may sound contradictory, but following inspirational figures has always been important in creative occupations. When that figure is a loving God who knows us more deeply than we know ourselves, then following him brings freedom.

Merton explains his vision of true creativity in terms of how we are made. ‘The image of God in man is his freedom’ and that image is gradually restored through following Christ. If God is the most creative one – after all he is the only one who can create from nothing – then there can be no lasting, fully satisfying creativity apart from him. Following God brings release from insecurity, self-centeredness and self-display, and a return to using our God-given gifts for his glory. ‘The dignity of man is to stand before God on his own feet, alive, conscious, alert to the light that has been placed in him, and perfectly obedient to that light.’

To gain freedom we must renounce our own ‘limited ends and satisfactions…the sacrifice of immediate visible results’, but what is gained is ‘something greater than [we] can see or understand’. The action of the creative follower of Christ ‘is now lasting and universal’, reaching ‘out to the ends of time and to the limits of the universe.’ How does this happen? Not through our own effort alone, because ‘The theology of creativity will necessarily be the theology of the Holy Spirit’ who re-forms us in God’s image.

This theology of creativity is not just for artists, because ‘the creative Christian is not a special kind of Christian, but every Christian has his own creative work to do, his own part in the mystery of the ‘new creation’. Neither is creativity about the lone genius. We are part of society but we are also individuals, so ‘situating the person in his right place in relation to other men and to God, our theology would liberate him in the deepest potentialities of his nature and the highest, most secret endowments of divine grace.’

The theologian Philip West also wrote about creativity in a Christian context. He has studied both cultural and biblical concepts of creativity, and come up with four criteria that he thinks are important in a God-centered concept of human creativity. First, he agreed with Merton that creativity should be embedded within society, not existing in a separate enclave. Following on from that, it should be for the benefit of society. Finally, the processes of redemption and creation are closely interwoven – something that is shared and ongoing.[2] This type of creativity is evident in much of science. Does one need to be a Christian in order to do good creative science? Of course not, but I would argue that it’s good to be completely free, in the way that Merton has described so beautifully.