Reading the Language of God 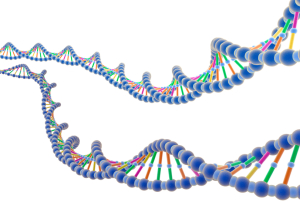 DNA has been called, by Francis Collins the former Director of the Human Genome Project, ‘The Language of God’. Interpreting that language has been a very interesting exercise.

I heard a talk last week by Howard Cedar, a developmental biologist from the Hebrew University of Jerusalem. Cedar has spent his career working on epigenetics – a series of annotations that need to be understood in order to read that language. To produce different cell types, huge numbers of genes have to be switched off, and that’s achieved by a series of biochemical changes to the DNA – methylation, for example.

So far so good, but it seems that this methylation can sometimes be affected by the environment, as seen in the famous (to developmental biologists) ‘agouti mouse’ experiment. If you feed ‘blond’ pregnant mice a special diet, their offspring get blonder. Other examples in humans include studies of populations that have undergone periods of starvation, or lifestyle studies including smoking*. In his talk, Cedar was cautious about the applications of this type of experiment to human medicine, but it’s fascinating work – and will hopefully become useful for improving health in the future rather than simply being alarming for parents-to-be.

I had a conversation with Howard about science and religion, and his immediate response was that they do not mix – rather like Stephen Jay Gould’s non-overlapping magistera (‘NOMA’) but further apart. I think one of the reasons was an encounter with a Christian student who decided to pray that his experiment would have a certain outcome. I suspect the student concerned hadn’t thought very hard about the nature of science. We do experiments to discover more about the world God has made, and how he chooses to sustain it, and that’s an incredible privilege. Our successes in science are tiny steps towards understanding the world God has made. I suspect that when an overstretched student prays that God will reinvent the laws of the universe so that their next paper can be a success, they provoke a chuckle from the Almighty…

*For an introduction to the area of Epigenetics see chapter 10 of The Language of Genetics, An Introduction by Denis Alexander.