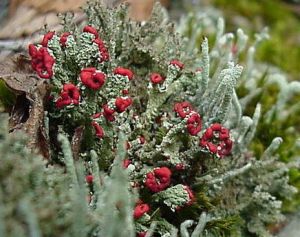 The process of evolution has produced a world of great beauty, diversity and complexity. Ants form structured societies, trees reach for the skies, and whole ecosystems thrive in inhospitable-sounding places like underwater caves, deserts or deep-sea trenches. Where the air is clean, rocks and anything else that doesn’t move is covered with a crust of lichen – a partnership between fungus and algae (or bacteria) that survives even the harshest of weather. The constant adaptation of living things to their environment through the accumulation of tried and tested genetic changes produces the most incredible solutions to living in different environments.

Oddly (to me), the concept of progress in evolution is debated among biologists. Change happens, but is it directional in any way? Denis Alexander spoke on this subject at the Faith and Thought conference in October last year. I was fascinated to hear about the changes in ideology among scientists over time, and I wonder how their views will develop in future years.

In the early days of evolutionary theory, progression was all the rage. Jean-Baptiste Lamarck and Erasmus Darwin – the earliest advocates of evolution – wrote that living things improve over time, climbing the great escalator of evolution. Charles Darwin was a bit more cautious, saying that although progress does happen in ecosystems, it’s not inevitable; he thought that living things don’t necessarily have an innate tendency to progress upwards in the scale of evolution. In fact, he didn’t use the word evolution for a long time because it smacked of progressionism!

Why the scepticism? Darwin’s experience led him to question whether every living thing is triumphantly climbing a ladder to more ‘superior’ forms. We often think of ourselves as being more advanced than other creatures, but in what sense? There are plenty of organisms that could be said to be more successful than us in biological terms, but which are relatively simple. Bacteria have colonised every ecosystem in the world, and it has been estimated that if you weighed all the bacteria in the world they would have a mass greater than the plants. Likewise ants are more numerous than animals. Small and mighty!

In a religious or philosophical sense, I know that I am worth more than a bacterium. What I’m interested in here is, although I can hold the metaphysical view that progress towards a goal (us) has happened in the world, what does the science say?

Academic science writing has been largely un-progressive since genetics came along in the 1920s and 30s. The fact that mutations are so involved in evolution shows that what is driving the process might not be so directional after all. On the other hand, there is evidence for directionality in some areas of biology.

We can certainly see an increase in the complexity of organisms over geological time, and we can also see an increase in adaptation. Plenty of respectable modern biologists, such as E.O. Wilson and Ernst Mayr have claimed to see evidence of progress in evolution, but the jury is out on whether increases in complexity are actually driven (or pulled) by anything. One arguments is that as genetic variation increases through mutation, complexity will inevitably increase.

In the end, does it matter if we see progress in evolutionary biology? Progress does not equal purpose. As Denis Alexander pointed out, God can use evolution to fulfil his plans regardless of the exact detail of the mechanism.

We can also be humble, sitting at the end of our branch of the evolutionary tree. We are special because of God’s relationship with us, not because of anything fabulous we have done ourselves. We can simply enjoy being part of an amazing world in which we share our DNA with single-celled algae, lobsters and orang-utans.