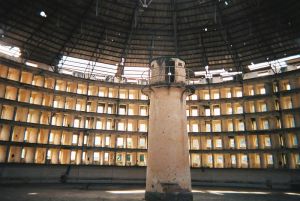 This is the metaphor that Alister McGrath used during his Science Festival lecture a couple of weeks ago. It’s a slightly grim word because it refers to institutional building design, and prisons in particular, but it’s useful here. A panopticon is a building in which you can see into all the rooms from one vantage point, and McGrath used this to illustrate how he came to faith. Fairly early on in his studies at Oxford University, he realised that he could make sense of everything he saw from the vantage point of Christianity.

Empirical fit is important for a scientist. McGrath studied molecular biophysics, and he has applied scientific principles to his faith. There’s a principle in science of ‘saving the phenomena‘: your theory has to make sense of what data you have. What worldview makes most sense of what we observe in the world? Some think that science is the only way to make sense of life, but McGrath agrees with CS Lewis, who says that ‘I believe in Christianity as I believe that the sun has risen: not only because I see it, but because by it I see everything else.

Rather than importing metaphysics into science, as some do when attempting to explain our lives, it is better to ask what questions science answers. Reality can be described by explanations at different levels, including the scientific and the religious. None of these explanations gives the complete picture of reality by itself, but all are needed to understand the whole. For example, in his book A Devil’s Chaplain, Richard Dawkins says that science has no method for deciding what is ethical. And the Nobel Prize winning biologist Sir Peter Medawar wrote in his book, The Limits of Science, that science doesn’t answer questions of purpose and meaning.

McGrath closed by mentioning three interesting figures. One was the social and political theorist Sir Isaiah Berlin, who wrote of three types of beliefs: the scientific, the logical, and those that can’t be proved but are related to the really important questions in life. Next is Rabbi Sir Jonathan Sacks, who recently wrote a book about science and religion called The Great Partnership in which he argues that we can’t prove life is meaningful and that God exists, but we also can’t prove love, altruism, and so on are also good. In other words, almost none of truths we live by are provable. Only shallows truths can be proved true, but they don’t make much difference to way we live our lives. Finally, the former physicist Revd Dr John Polkinghorne, KBE, has said that science can ‘throw up questions that point beyond itself and transcend its power to answer’.

So where does that leave us? The relationship between science and religion is complex, and allows space for interaction. It was amazing how, after outlining in very definite terms that there is evidence but not proof for God, and explaining why this is no different to any other important question in life, people tried to push McGrath in the question time to comment on the possibility of…proof for God.

Why do we accept meaningful relationships on the basis of evidence but not proof, but expect more when it comes to belief in God?