New Approaches to the Origin of Life 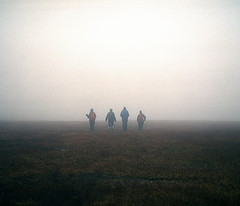 Studying the origin of life is an intractable problem, a little like navigating the misty trackless waste that is central Dartmoor. For an event that happened so long ago, we are unlikely to find a ‘smoking gun’. If life originated on another planet and then somehow seeded life on Earth – a possibility that is being taken seriously at the moment – we have even less hope of finding a solution.

This was Christopher Southgate’s impression of the field of origins research until a few years ago. Chris is a theologian and former biochemist based at Exeter University, and in his Faraday seminar on New Approaches to the Origin of life: Scientific and Theological last week, he explained why he is now a little a more hopeful. He also described a very unique research programme that combines both science and theology.

Life is generally easier to describe than define. Any description that tries to be all-inclusive will inevitably leave something out. Southgate’s own definition includes three properties: enclosure (inside a membrane or cell wall), metabolism and reproduction. Origin of life researchers tend to focus on either metabolism or reproduction in isolation, but Southgate thinks that a more fruitful approach would be to pursue both at once.

Chris has attended two conferences of the International Society for Study of Origin of Life, and the 2008 meeting was what reminded him of those walks on Dartmoor. In 2011 things seemed to be moving again, with some interesting biochemical work on the synthesis of the components of RNA (an information molecule similar to DNA), and a wave of discovery of planets in other solar systems that look promisingly Earth-like. This new research caused a paradigm shift in Southgate’s thinking. Life may actually be quite widespread in the universe, although the emergence of intelligent life may be a rare event.

The above statements raise no particular conundrum for theology. God desired the origin of life, and is described in the Nicene Creed as ‘the Lord, the giver of life’. There is no need to think that the origin of life might not be a natural phenomenon. The life that eventually emerged on Earth may have arisen from extraordinary set of coincidences, or it may be all over the Universe. In either case, the theological emphasis is different.

If life is unusual, then God’s role may have been (and this is purely speculation) in creating possibilities for life and protecting them from failure. So some primitive cells survived the very harsh conditions that existed on Earth several billion years ago, the large asteroid collision that made the dinosaurs extinct did not affect every living thing, the early hominids were not wiped out by other animals, and so on. It was perhaps a case of protecting processes that led towards the Divine purposes, in the same way that Jesus did not catch flu and die as a child.

On the other hand, if life is common then we can talk about how God created a wonderfully fertile system. I don’t have space here to discuss the possibility of intelligent life which – as far as we know – is vanishingly remote. If thinking beings existed on other planets that would raise all sorts of theological conundrums, many of which Southgate did address in his talk.

Southgate now works on a collaborative research programme with the medical doctor and theologian Andrew Robinson, and origins of life chemist Niles Lehman. They are interested in the interpretation of environmental signals by ribozymes: RNA molecules that act as enzymes, and may be a remnant of an early form. For living things, being able to respond to their surroundings is important for survival. There is a risk that a sign like a chemical or temperature gradient may be misinterpreted, but if it leads to food the reward is worth the risk.

One important aspect of signal interpretation is cooperation. Martin Nowak and Sarah Coakley have already shown, in another biology-theology collaboration, the importance of cooperation in evolution. Before evolution can take place, however, you need replication. If a number of RNA fragments were able to act together, that might have been a precursor to replication. If cooperation was involved in the development of such early life forms, that raises some interesting questions about whether the cooperation we see among animals is not a ‘higher’ property, but typical of life in general.