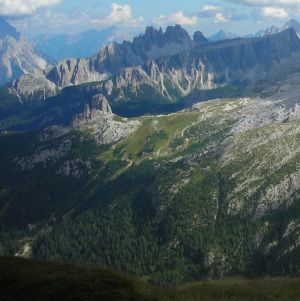 Climbing mountains brings perspective. Looking down from the top of a high peak, you can see the whole of the surrounding area laid out like a map. You can plan where you want to go next, or maybe even your whole route for the next few days. The feeling of achievement that comes from climbing a mountain is wonderful. Chairlifts and funicular railways are great – especially if you can’t manage a climb – but standing on the summit is many times more exhilarating if you’ve plodded very step of the way up from the bottom.

John Muir was unusual as a scientist because his fieldwork actually involved climbing mountains. A career in most branches of science involves working indoors, sometimes in windowless rooms. As a PhD student in Edinburgh I spent many days examining Zebrafish embryos in the basement, but I could see the Pentland hills from my lab bench – until Cancer Research UK built a research centre that blocked out the view (and I am clearly still nursing a grudge against them for it!) Actually climbing the mountains on my doorstep was a refreshing reminder that the world was going to carry on revolving whether my experiments worked or not. Over the last year I have noticed that mountains are a popular source of metaphors for describing the scientific journey. Being interested in mountains myself, I began to collect these passages and thought they would make an interesting blog post and source of quotes for others. The vantage point of a new scientific theory can make sense of so much knowledge that it feels as if you are looking down from a great height on a whole panorama of information, some familiar and some unfamiliar. Suddenly the data you have been wrestling with makes sense, and you know where you are. You feel small in the face of a vast and largely unexplored landscape. You are gripped by a powerful sense of awe, and the elation of achievement. The physicist Werner Heisenberg has captured this experience particularly well.

The last few weeks have been very exciting for me. Perhaps an analogy is the best way of describing my experiment: that of the attempt to attain the summit of atomic theory which is still unknown, an attempt which has required great efforts of me over the last five years. And now the summit is there in front of me; the whole area of internal relations in atomic theory is unexpectedly and clearly spread out before my eyes. What these internal relations show in all their mathematic abstraction, an incredible degree of simplicity, is a gift that we can only accept with humility.[1]

For Francois Jacob, on the other hand, the mountain was a symbol of something conquered. When he came up with his Nobel Prize-winning idea for gene regulation, he said that he felt ‘an intense joy, a savage pleasure. A sense of strength as well, of power. As if I had climbed a mountain, attained a summit from which I saw in a distance a vast panorama.[2]

Rhoda Hawkins, a theoretical physicist at Sheffield University, has said that these moments are ‘sometimes…too rare, but if I got them all the time I would take them for granted. Even the struggle is contributing to that sense of wonder, because it’s more amazing if it’s difficult and complicated. If climbing the mountain was too easy, then you wouldn’t feel so happy when you got to the top.’

For the biologist Max Perutz this feeling was a natural high. ‘A discovery is like falling in love and reaching the top of a mountain after a hard climb all in one, an ecstasy not induced by drugs but by the revelation of a face of nature that no one has seen before and that often turns out to be more subtle and wonderful than anyone had imagined.’[3] In these mountaintop moments, finally the mist clears, and the scientist can ‘see’ a long way intellectually. One can rest and feel restored after the hard slog.

Enrique Mota, a mathematician at the University of Valencia said ‘When we finally find the solution to a problem, when we can prove it and it is well done, it is deeply satisfying…it’s like reaching the top of a mountain. The sun comes out, you enjoy the view down the valley and you feel refreshed. In describing the problem and showing the solution, you feel at ease because a sense of order has been restored.’ What can one make of these feelings from a spiritual point of view?

Intellectual mountaineering was a way of life for Einstein: a calm contemplating of the order of things that was closer to meditation than conquering. ‘A finely tempered nature longs to escape from personal life into the world of objective perception and thought; this desire may be compared with the townsman’s irresistible longing to escape from his noisy, cramped surroundings into the silence of high mountains, where the eye ranges freely through the still, pure air and fondly traces out the restful contours apparently built for eternity.’

Jeff Hardin, Professor of Zoology at the University of Wisconsin-Madison described the difference that being a Christian made to this experience of awe at scientific discovery. When I interviewed him he said that ‘I think my non-Christian colleagues have this ‘aha!’ moment, but for a Christian the moment is more like when you go on a hike and there’s a special spot at the end, on top of a promontory with a beautiful view that not very many people know about. You get to it for the first time and see this vista. For most people the natural response is to want to share that with somebody, and I think the same is true in science. As a Christian I want to share that discovery with God himself, so that process [of discovery is] an act of worship for me.’

For a Christian the things discovered through science were ultimately made by God, even if the process of creation was through the slow uphill climb of evolution. To be able to stand on a mountain – literal or metaphorical – and see your Father’s work all around you is an exhilarating experience.