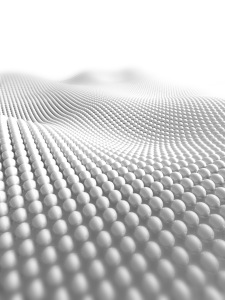 When atoms and molecules come together, the new structures or systems they form can have unexpected properties. This principle is called emergence, and some have claimed that it shows there is more to the universe than material things. Last month at the Faraday Institute summer course, the German physicist Barbara Drossel explained why she thinks emergence is a real phenomena, and why it is so important in discussions about science and faith.

Science uses reductionism to study a system. If you break it down and do what you can to understand the parts, you should understand the behaviour of the whole a bit better. According to Drossel, the reverse is also true. As complex systems come together, new and beautiful properties emerge that are every bit as fundamental as the forces that hold together the atom.

When you put a collection of molecules together, they start to do things that they couldn’t do alone. For example air exerts pressure on the sides of a box; when a fluid is heated from below it forms convection cells; and if you mix certain chemicals together they react in a way that produces beautiful patterns.

The more different the parts that are added together, the more complex the resulting system. Biological organisms are the most complex systems that exist, because they consist of multiple systems made of very different parts, all interacting together.

A closed system like an insulated box of gas has no interaction with the outside world, but an open system – like the human brain, operates in an environment that both feeds into its behaviour and receives its output.

Studying these higher levels of organisation can bring new insights into the properties of matter. This happens, said Drossel, because it is often impossible to derive the behaviour of large collections of molecules from the microscopic physical theories. Scientific laws and theories are only approximately correct, and a system is always open to outside influences.

This principle of unpredictable properties is known as ‘weak emergence’, and is quite controversial in physics. The debate is hot and interesting, but it’s really only a debate about the description of matter. What happens if you throw in a bit of philosophy?

Strong emergence is the idea that the higher properties that emerge from complex systems are not just difficult to predict, but they are actually completely new properties. The lower levels of organisation are important, but the final outcome is not determined simply by the behaviour of atoms and molecules alone.

If strong emergence actually happens, that means complex systems are not simply determined by the interaction of their components. Higher-order principles such as symmetries might determine the important properties of these systems, and there might be ‘top-down’ influences at work, not just the ‘bottom-up’ forces exerted by the parts of the system. According to the physicist and Anglican priest John Polkinghorne, the unpredictabilities present in the microscopic world permit this openness to other causes.

So why might a scientist believe in strong emergence? Drossel gave several arguments in its favour. First, the parts have never existed without the whole. Since its inception, the universe has always had forces and symmetries, size and temperature, all of which affect the particles in it, so it’s almost impossible to speak of the properties of particles alone. Second, some of the details about the lower-level behaviour of atoms are not actually important in determining the behaviour of the whole system. There are issues with the predictability of forces and the movements of particles, but emergent properties are insensitive to these details.

The final piece of evidence for strong emergence is the fact that non-material things can have an influence over complex systems. Taking humans as an example, principles such as the rules of logic or moral values often affect our behaviour. If these principles are real (i.e. if they exist whether humans exist or not), then they cannot be determined by atoms and molecules. So the complex system that is a human being is not completely determined by the atoms and molecules of their body, or the physical properties of his or her environment.

Barbara was quick to point out that physics deals only with what happens within the physical matter of the universe. If God exists, he is an ultimate reality and exists outside of the world as well as within it. He could have created any kind of world he liked, so it’s impossible to argue for the existence of God from science. What we can say, however, is that there is good evidence from physics that we have freedom to act in the world.

You can read my previous post on emergence in human consciousness here.

There is also a short paper explaining emergence on the Test of Faith website.