More Satisfying Answers: Taking the conversation about science & Christianity to a deeper level in New Zealand

Sometimes science can throw in questions that seem to upend theology completely, but is that a bad thing? In the end, faith can come out of those conversations far stronger and deeper than before. I recently spoke to Dr Nicola Hoggard Creegan, a theologian with a scientific background who is now the Project Development Officer for a new initiative called New Zealand Christians in Science. Nicola’s own faith went through a similar process of being tested and then reaffirmed, and she still appreciates the ways in which science can make theologians think.

Can I find out what got you interested in science and faith in the first place?

It goes a long way back. My parents taught science, so I came from quite a scientific background. They were also Roman Catholic, so I read Teilhard de Chardin very early and he absolutely inspired me. I think I had given up believing in God at that stage, but I bought his vision of the way evolutionary biology and faith fit together – it was so glorious. I studied mathematics first of all and then eventually theology. Several years after I’d finished my PhD I went back to try to integrate the two together, but I’ve always been interested in problems that impact on science and theology.

So as a kid would you talk about science and faith issues around the tea table?

No, not really. I was the sort of child that kept my questions to myself, and my parents did not share their questions either. My family was Catholic but my larger family wasn’t, so I was living on a boundary there between Protestantism and Catholicism. Trying to work out what was going on and to cross those sorts of boundaries has helped eventually.

What is it about the interface between evolutionary theory and systematic theology that gets you excited? Is there anything there that helps to build up your faith?

I think it’s quite fascinating and challenging. It does challenge the whole basis of systematic theology because it challenges the idea of the fall, of original sin, of human responsibility for being how we are. It is pretty thorough in its ability to upend systematic theology, but I think that the answers we can get eventually are much deeper and more satisfying.

The more I look at evolutionary biology from different disciplines, the more extraordinary it is and the more interconnected everything is. I couldn’t imagine trying to do faith without that kind of input. I know that might seem very strange, but that’s how it is for me.

Can you give an example of how evolutionary biology provokes wonder, or connects with your faith in some way?

I don’t get blinding insights, but I think it’s a gradual accumulation of things. One of the interesting things is the way in which evolution occurs within the substrate of mathematics and physics – biology is not happening independently of all of that. So you get this extraordinary interweaving of the physics and mathematics with the biology of life.

In the last few years, I have been part of the human uniqueness project at Notre Dame. The way in which anthropologists now describe evolution of the human species, over a million years, and the way in which community was built and compassion became dominant is all very extraordinary. Again, it can be both challenging and fascinating, but I think it’s much more fascinating and it adds such depth to the whole understanding of who a human being is. The conversation between the two disciplines is endlessly rewarding.

How did you get involved in the New Zealand Christians in Science project?

I ran something called TANSA, Theology And the Natural Sciences in Aotearoa (which is the Maōri name for New Zealand) for about ten years when I was teaching theology, and so that’s how I got involved with the project. My role now is to make NZ CIS work – not only in Auckland, but in Wellington, Christchurch, Dunedin and so on  – to get people doing seminars and having discussions, and make that viable in all these different places. So we’re holding launch events, organizing lectures, and things like that.

Have you got any stories to tell about what’s been happening?

Our academic year only begins in March so, although we’ve been working before that, it is really still early days. I’ve had a few low-key meetings in other centers and we had a bigger launch event in Auckland, and there’s a lot of interest. There are people starting to come out of the woodwork who are enthusiastic, and I hope they will get involved. As you know, both students and faculty are extremely busy, so it’s a matter of trying to get people to come a little bit at a time to make things work. It’s trying to find out what would be helpful for them, especially in other centers. Also, we have got a great relationship with the chaplaincy at the University here, which really makes it possible.

Is there anything particular about the New Zealand context that changes the discussion in any way?

Well, there is very little theology here. It’s a very secular country, theology’s not done much at University, and it has  struggled to get a foothold in Auckland. That makes any kind of academic discussion much more difficult. There is a high level of suspicion of anything to do with Christianity in New Zealand Universities, so trying to combine science and Christianity isn’t necessarily an easy task. I think that’s a bit different from either the US or the UK.

Where are you hoping to take this conversation? 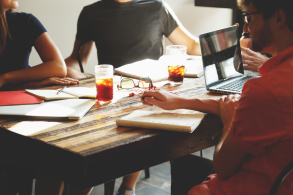 Could you give an example of one of those ‘interesting and subtle’ conversations?

I think the nature of evolution itself is not just what people thought it meant in the mid-20th century – it’s changing drastically. Those changes are enormously helpful for theology, and help us to interact with the evolutionary story. On the other hand, there’s all this business about how we think God is involved in matter and life – that has got to affect the way we understand an evolutionary process. But the whole idea that God might be intimately involved is very threatening to some scientists, so there’s enormous complexity there. People attach labels to themselves far too easily, which doesn’t make the whole conversation any easier.

If I were a Christian who isn’t very interested in the high level discussions, why should I study evolutionary biology? What is it going to add to my experience of the world?

Christian theology does talk about areas that the evolutionary story also covers – it talks about origins and sin and suffering. If you as a Christian have an answer that is incoherent with scientific terms, then it’s probably not good for you because you might eventually work out that it doesn’t make much sense. So even if you’re not interested, I think it’s good for people to try to enter into this discussion. I realise that for many people the whole idea of thinking about pre-history, or pre-humanity, is just not a part of their ordinary everyday life, but I want to convince the theologians to get involved – that is important.

It does sounds incredibly important, and I’m excited about the potential for this project to have an impact on New Zealand. All the best with what you’re doing.

Thank you Ruth, it was good to talk to you.

Dr Nicola Hoggard Creegan is a theologian based in Auckland, and specialising in the interface between evolutionary theory and systematic theology, with broad interests also in all issues of public and contextual theology and ecology.  For seven years she Chaired TANSA (Theology and the Natural Sciences in Aotearoa). Her recent book, Animal Suffering and the Problem of Evil (OUP, 2013), examined theodicy given the reality of long aeons of animal suffering before humans arrived. It interacts with the challenges that systematic theology faces in light of evolution, but also examines some of the changes win evolutionary thinking in the last few decades. She is working now on the problem of free will in dialogue with the sciences. She was a part of the Human Nature Project at CTI in Princeton, 2012-2013, and the Human Distinctiveness Project at Notre Dame 2015-2016. Nicola has taught theology in the US and NZ. Her doctorate is in theology, but her original training was in mathematics and biology.