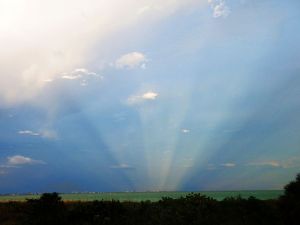 I have written about science being creative, and here’s a great story along those lines: the poet and priest Gerard Manley Hopkins published in the scientific journal Nature*. Hopkins’ contribution to science took the form of two letters, A Curious Halo and Shadow-Beams in the East at Sunset, that were published in November 1882 and November 1883, based on observations he had made of the setting sun.

Hopkins did something most people don’t think of, and turned his back to the setting sun. What he saw was a series of rays that looked as if they were coming from the horizon at a point opposite the sun. This light-effect had already been observed by meteorologists, and is simply the shadows of clouds in front of the sun, cast from one horizon to the other. Perspective makes these shadows appear to be converging in the east, but they are in fact parallel. The technical name for them is ‘anticrepuscular rays’.

The artist Constable observed this light effect in 1831, and an 1881 correspondent to Nature described a very vivid example that he had seen in China. Hopkins first letter was a response to this observation, saying that ‘things common at home have sometimes first been remarked abroad’, and ‘There seems no reason why the phenomenon should not be common, and perhaps if looked out for it would be found to be.’

Artists are keen observers of nature. The theologian and poet Christopher Southgate calls this ‘intensive looking’*, and I’m sure there are many more examples of science being helped along by their eyewitness accounts. As Hopkins said, ‘who looks East at sunset?’

Hopkins’ second letter is significant because it is more useful scientifically. He wrote again to describe a very pronounced and beautiful ray effect the following year. He had no idea of the cause, but it seemed worth reporting. Others mentioned a similar sight in other locations. It turned out that these beautiful light displays were the after-effects of the great volcanic eruption that devastated the Indonesian island of Krakatoa. The volcanic ash thrown into the air affected the weather and light conditions around the world for years afterwards, and a number of letters in Nature provided vital records of this.

Unfortunately (or perhaps fortunately for hard pressed editors), Nature no longer has a place for amateur writers. The scientific rigour of their letters section has risen since then, and it now contains mini scientific papers. It is left to scientists themselves to look closely, though if they took the eye of a poet from time to time that might help them in their observations.