Life in a Bountiful Universe 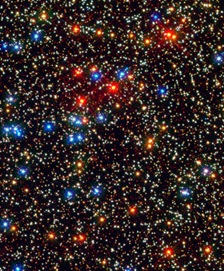 The astronomer Dr Jennifer Wiseman visited Cambridge recently to speak about her work on ‘exoplanet’ discovery. Exoplanets are planets in solar systems other than our own, and until 1989 they were the stuff of science fiction. Now we know there definitely are other planets in the universe, some of which may be like Earth. The discovery of life on other planets – perhaps single celled organisms – in the next few decades is a real possibility.

Our universe is active and fruitful. We live in an abundant universe, and can celebrate that with new knowledge. The changes made to the Hubble telescope in 2009 have brought us beautiful new pictures that show the universe in greater depth than ever before. This one of the Omega Centauri star cluster shows a startling variety of stars.

The universe is beautiful, and the range of telescopes that astronomers use are like a symphony orchestra, with many different instruments contributing to our knowledge of the universe. The Hubble telescope has a relatively narrow field of view, but can see deeper into space. The large ground-based telescopes can take wide-angle shots, and Infra Red or radio telescopes can detect differences in temperature.

The universe is vast and active, with old stars disintegrating and exploding into clouds of gas, and new stars forming as those clouds coalesce again. It takes several generations of stars to generate the chemical elements that are needed for life. When the right factors are all present, a star coalesces and dusty discs develop around it from which planets are born.

Galaxies such as the famous spiral galaxy contain around 100-200 billion stars, and there are at least 200 billion galaxies in the observable universe. Even if planets are rare, might there not be life elsewhere in this vast cosmos? There are now a thousand confirmed exoplanets, and research is still gathering pace. We might have as many as 5 billion planetary systems in our own galaxy. What scientists like Jennifer want to find out is, what fraction of the stars in our galaxy harbour potentially habitable planets? The easiest way to start is to look for planets similar to our own, because we already know Earth is hospitable to life. So we need Earth-sized planets with a crust, the right temperature for liquid water, and evidence of elements like oxygen and carbon in the atmosphere.

By the time of Jennifer’s talk about four Earth-like candidates had been found. The most promising one is too far away to do follow up study, but planets seem to be so common (perhaps one for every star in our galaxy) that it might not be long before we find one a bit nearer. Another was announced the week after the talk: one that showed evidence of water vapour in the atmosphere. This new planet is so hot that it’s unlikely to contain life, but it’s a start.

I am excited about the search for exoplanets, because if we find even very simple cells on another planet that would teach us a huge amount about how life developed. Does it always involve DNA? What might the precursors be? Are there alternative ways to generate life?

Jennifer Wiseman said that the human responses to the grandeur of the universe span a wide range. The data doesn’t tell you how to reflect on it, so your reaction depends on your perspective. As a Christian it leads her to worship, and I agree. I believe in a big God who is immensely creative and immensely generous. What we find in the universe helps me to understand a little more about him, and my awe turns to praise.