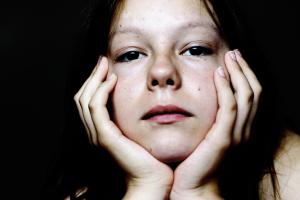 A few years ago I paid a visit to the Smithsonian Museum of Natural History’s Human Origins exhibition. Our tour guide was Rick Potts, director of the Human Origins Program and curator of anthropology at the Museum. Potts has been involved in activities with BioLogos, and is keen to help Christians understand his research.

The David H. Koch Hall of Human Origins follows the history of humankind, starting with creatures that were just beginning to walk upright, and moving right through to the present day. We were shown the development of tools, different types of food, social activities and symbolism. It was fascinating to explore the artifacts and reconstructions of the digs where they had been found, but I also found the experience very moving.

We are the only hominins (the group of species that includes ourselves) alive in the world today, but part of the exhibit allows visitors to meet the others with whom we used to share ‘our planet’. Data from excavated skulls has been used to reconstruct the face and hair of a number of different hominin species. These heads are displayed on pillars at the right height for each species represented. So I could crouch down to meet Homo floriensis, or stand tall to look into the eyes of Homo heidelbergensis. It might sound creepy, but it wasn’t. The heads had lifelike features, and Homo neanderthalensis, heidelbergensis and Homo erectus had been given intelligent expressions. I felt as if I really was meeting my ancestors.[1]

As I walked between the statues I asked myself, “Why us?” Part of the Christian answer to this question is that God made us ‘in his image’. No matter what conclusions you take from the evidence for human evolution,[2] the fact remains that other hominins were around before we came on the scene, so presumably we are somehow different from these – can I call them people? – whose eyes I was staring into. As Barbara Drossel said in her recent Faraday lecture, there is more to the world that just atoms and molecules.

Rick Potts has spent his career looking into the reasons why we survived and the other hominin species didn’t. I suspected warfare, but apparently the real reason may have been (surprisingly) subtler than that. We have adapted to live in every terrain and climate on earth, but it seems the others didn’t. Even Neanderthals, the only other hominid species known to use symbolism, died out in the end. As the ice ages came and went, human beings moved around but the rest appear to have stayed put and suffered the consequences.

As I took in the displays describing the evidence for how we began to gather socially around a fire, make music or write, I felt proud to be human – but I also felt very small. It seems that we could so easily have disappeared with the rest. Our existence is fragile, but we are here, and somehow we have developed to a point where we can understand the world around us in great detail, produce sophisticated technologies, and find out about our own origins. As Potts said in an interview with BioLogos, “an aspect of being human has been the process of becoming human that scientists have been able to uncover”.

In his book The Message of Creation, David Wilkinson explains what he thinks it means to be made in the image of God. Our likeness to God has nothing to do with our own cleverness or abilities, but is a gift. God created us on purpose and chooses to enter into a relationship with us, making us his representatives – a position that comes with some responsibilities.

My visit to the Smithsonian was in 2011, but I can still remember the deep feeling of humility and gratitude that came over me as I walked from the ‘meet your ancestors’ part of the gallery to the ‘changing the world’ section. We cooperate and shape our environment, and that is one reason why we survive so well, but can we go further than that? Now that we have uncovered so much about our fellow hominins, can we let that knowledge inform our attitudes to ourselves, our place in the world, and our relationship with God?

[1] Although technically most are on other branches of the hominin evolutionary tree, and we just share a common ancestor much further back.
[2] For other organisations with resources on this question, try Test of FAITH,  BioLogos, Christians in Science, and the American Scientific Affiliation.