Hope for the Ocean 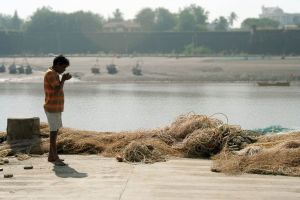 This is the final part of my interview with marine conservationist Bob Sluka. Here he reflects on the science-faith dialogue in the non-western world, and how he finds his place as an academic and a Christian in the world of marine conservation. (Part 1, Part 2)

To me, there appeared to be a separation of science and faith in the Maldives and India. People’s religious devotion in those countries had more to do with personal faith orientation. They were very devout people but they didn’t seem to talk much about how their faith interacted with their science. Of course I wasn’t thinking that way either at the time (see part 1).

In South Asia and India there was so much poverty that the questions that came up in a faith context were about suffering and other problems. The science-religion question doesn’t necessarily come into conversation. We had to focus on people as individuals with spiritual and physical needs, and help them as whole persons in a holistic way. Science is certainly not keeping people from God in those countries. Nearly everybody in the non-Western world is religious, so there isn’t the perception we have here that scientific data indicate there is no God. With increasing numbers of people who are educated in Western universities, or as certain people promote atheism then it may become more of an issue.

There is a sense – and the science-faith author Denis Alexander talks about this – in that when you’re doing a bioassay in the lab, there isn’t a Christian bioassay and a non-Christian bioassay. I use transect lines to estimate coral cover on the sea bed, and there’s no Christian transect line. So what does it really mean to have your faith influence your science? Is it your motivations? Though I’ve only recently begun to connect theology and science in an overt way, my faith has always helped me to choose a path in science.

As much as I love the ocean, a truly authentic way of looking at the world always has to involve people in some way. Richard Baukham is a biblical scholar and theologian who has written about the ‘community of creation’. There are some conservationists who act as if humans are parasites, and it’s almost as if the best thing to do is to get rid of us. To be honest, I’ve sometimes had that feeling. We used to live about 50 kilometres from the southern tip of India, but it was a three-hour drive because of the traffic. The roads were jam-packed with stores and rubbish but every once in a while you’d get a glimpse, behind all the human debris, of beautiful fields, coconut palm trees and mountains. Sometimes I felt as if we should just get rid of the people! But it’s important to recognise that we are all very much a part of the ecosystem, along with every other creature.

I’ve recently written a Grove Booklet called Hope for the Ocean: Marine Conservation, Poverty Alleviation and Blessing the Nations. I now know that conservation in and of itself is totally valid, but I have an increasing passion for the poor: seeing how people’s lives are affected by over fishing, for example. So I have one foot in the academic world, one foot in the conservation world, and another in the more traditional church world. I don’t actually have three feet, so I’m trying to sort of dance in the middle of all three of those things. The booklet has a hopeful message because when we collaborate, in a way, with God we get exciting results.

A lot of my research has focused on Marine Protected Areas, which are like national parks in the sea, looking at whether they are doing what they claim to be doing. It turns out that there are actually very few conservation measures that have been shown to both benefit biodiversity and reduce poverty, and these marine protected areas are one of the successful ones. If you look at Genesis you see that God didn’t just command humans to be fruitful; he commanded the fish to be fruitful as well. For example, the number of eggs a fish can produce is exponentially related to its size. When you protect fish inside a Marine Protected Area they grow bigger, and a fish that’s twice as big might produce two hundred times as many eggs, or even more. Fish eggs are buoyant, so the areas around the reserve also benefit from an increase in numbers of fish. The reserves tend to be made in beautiful areas, and are places where we see God’s creation as close as possible to the way it was intended to be. These places are a reference point for science, but the abundance of marine life also overflows out of the protected areas so that communities nearby can benefit by catching more fish.

At the moment I’m starting some work in Watamu Marine National Park in Kenya. This project is an integration of all three of the worlds that I want to be involved in. It is right on the doorstep of an existing A Rocha field study centre. So if you were sitting at the breakfast table at the Centre, you would be looking out at this marine park. It’s as if God has deliberately placed this Christian centre next to the preserve! So I’m looking forward to working with A Rocha and trying to help them develop marine conservation programmes. Our work combines a strong Biblical commission to care for that part of Kenya regardless of whether it helps us or not, because God created it, with a chance for real peace-making. The amazing thing is that the Marine Protected Area really does help the local people, who are primarily Muslim fishing communities. To me, that is the excitement of being involved in marine conservation. I’m sure there are examples to the contrary, but in this case when we take care of things the way God intended, we see this incredible abundance.