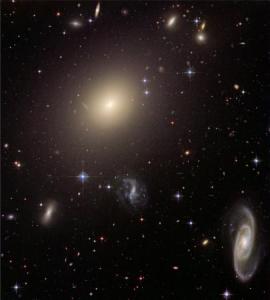 Christian researchers often say that scientific discoveries uncover more of God’s creative power. But how do people of different faiths work together in science? How can they reach reliable conclusions? In the USA, scientific research and teaching are carried out in both secular Universities and Christian Colleges. Deborah B. Haarsma has lived and worked in each of these environments, and is currently Professor in Physics & Astronomy at Calvin College, Michigan. Alongside her research in astrophysics, Deb now spends some of her time helping students and others to relate their faith to their studies in science. This week she was appointed as the new Director of BioLogos, ‘a community of evangelical Christians committed to exploring and celebrating the compatibility of evolutionary creation and biblical faith’. In this interview excerpt she explains how science and Christian faith are compatible.

It’s almost a universal human experience to look up at the stars in the dark night sky and say, ‘Wow, that’s amazing! That’s beautiful!’ But as a Christian, I have a deeper experience. I not only see the wonder and the vastness of the universe but I also see a connection back to the Creator who made it. I believe that the God of the Bible created all that we see in the whole universe and part of what God has commanded us to do is to study and take care of it.

As an undergraduate I majored in physics and music. Then I went on to do a PhD in astrophysics at the Massachusetts Institute of Technology (MIT) in Boston. I see the fact that we can do science at all as a tremendous testimony of God’s faithfulness: the laws of physics are stable in every time and place where we test them. There’s a great passage in the Bible, where God says he has “established my covenant with day and night and the fixed laws of heaven and earth” God is speaking to the nation of Israel and points to the fixed laws of nature as a testimony of how faithful he’s going to be to his people. The only reason that physics works at all is that experiments are repeatable, and the only reason they’re repeatable is because God is faithful in governing the universe.

I can understand how some scientists look at the natural world and decide not to believe in God, because I don’t believe that nature gives us proof of God. There are a few scientists that have come to faith because science pointed them that way but I think for most of us it was something in our personal lives. It was a person we met, it was seeing Christians in action, it was finding that Christianity explains human nature, it was sensing the presence of God. These non-scientific arguments are more important in making a religious commitment than logic and scientific evidence.

It’s unfortunate that both the Bible and science have been hijacked at different times. There are people who will take scientific evidence and say, ‘We have a scientific explanation for X, and therefore God is not involved in X and we don’t need God.’ There are other people who say, ‘Science can’t explain X, so God must be involved and that’s proof of God.’ The two sides argue against each other, driving each other to more extreme statements. I think both sides are completely wrong. Both make the assumption that a scientific explanation is opposed to God’s involvement. In the Bible, though, God is described as in charge of every part of the physical world in regular patterns. In my view, science is merely describing how God works in nature. God is also present in the X that science doesn’t understand yet but it’s foolish to use that as proof of God’s existence. God wouldn’t disappear as soon as a scientific explanation for X is found.

Everybody brings their own perspective to science, so it’s impossible to have pure scientific results without any other influence. I think most scientists today see science that way: as a human activity. We talk about ‘The standard model of particle physics’ or ‘The big bang theory’ or ‘The theory of general relativity.’ We say ‘model’ and ‘theory’ instead of ‘law’ because we know that we don’t have it all figured out yet. So how do we know that the results of science are reliable at all?

Science functions as a community, with people from different philosophical or religious backgrounds working together. In my research I’ve collaborated with people of many different belief systems. We can work together because we all recognise the worth of this kind of investigation. All scientists share certain philosophical beliefs: that the universe is regular in its operation; that there are regular laws; that humans are capable of understanding and describing those laws; that we need to do experiments to test those laws and make sure our understanding is correct. We might all come to those beliefs from a different angle. I come to them because I believe in the Christian God who faithfully governs the universe. An atheist might choose to believe them just because they seem to work. We can overlap in those beliefs even while disagreeing about other things, and where we overlap we’re all doing science on basically the same playing field.

If many scientists with different viewpoints can get together and come to the same conclusion, that gives you some sense that they are probably on the right track. It is unlikely that they are all biased in the same way. The scientific process, including the way that scientific papers are reviewed, helps us overcome biases and get at something closer to the truth. There’s a similar process in biblical scholarship, where different scholars share their work or work together. Christians read the Bible in different ways and see different meanings in the same passage, so not everybody is right about their own interpretation. The practice of correcting and challenging each other helps them come to a better understanding of Scripture.

I believe that God would not say something through the Bible that contradicts what he reveals though the created world. The conflict comes at the level of human interpretation. We could be wrong in how we interpret the Bible or wrong in our scientific interpretation of nature (or both!). As Christians, we can’t deal with conflicts by throwing out science or ignoring parts of the Bible because we believe God speaks through both. Instead, our role is to continue to investigate both aspects of God’s revelation and keep looking for that underlying truth.

This post was first published on everythingconference.org, and is an extract from Test of FAITH: Spiritual Journeys with Scientists, Ruth Bancewicz (ed.), (Milton Keynes: Paternoster, 2009/Eugene, Oregon: Wipf and Stock, 2010). Used with permission of the publishers and the Everything Conference.