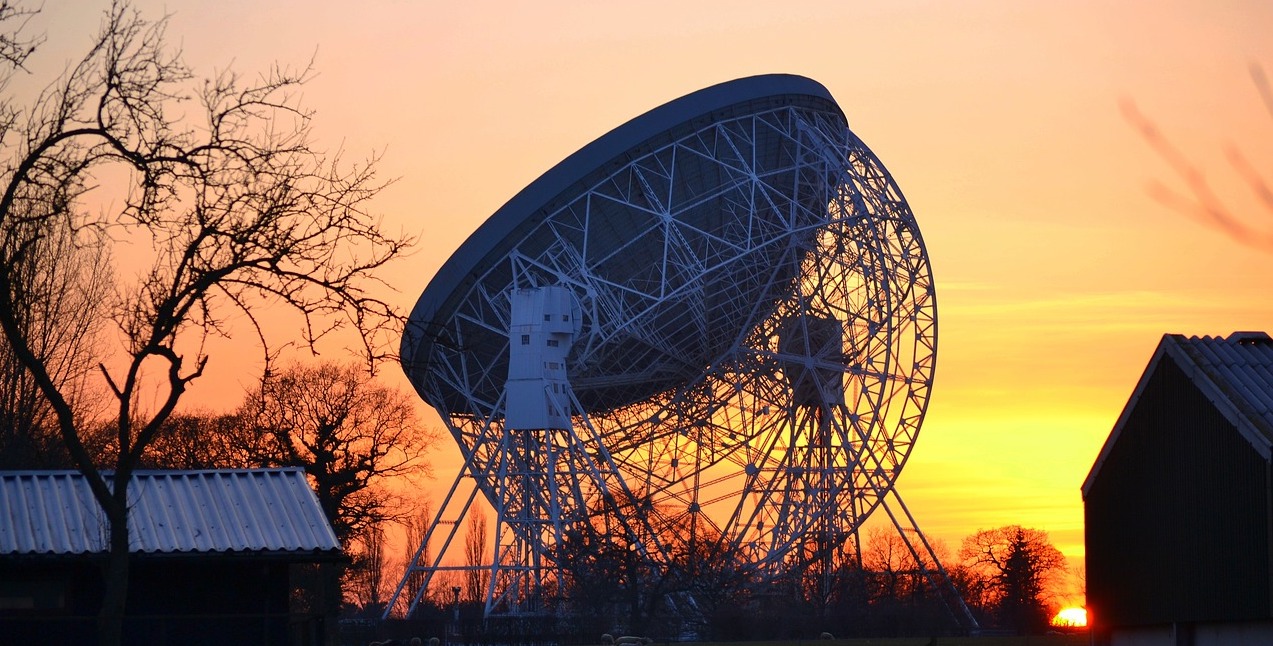 The Lovell Telescope at Jodrell Bank, by Richard Marriott, Pixabay

God found me very late in life. I had walked out of church at the age of 14, because it didn’t make sense. We arrived back from Kenya in time for me to join the local school for O-levels, and I became committed to studying science from then on. I read Natural Sciences (Physics) at Cambridge, then came to Jodrell Bank (University of Manchester) to do my PhD in Radio Astronomy. I not only found a PhD, but also a husband at Jodrell, and went with him to Caltech when he got a postdoctoral position there.

After some visa negotiations, Caltech also found funding for me, and I started doing optical astronomy with the big telescopes at Palomar. When we returned to the UK three years later, I obtained more funding to work on computational astrophysics, building n-body models of galaxies to see how the stars moved to make up the shapes we see. After an advanced fellowship, this led to lecturing in the Physics Department in Manchester, but by this time I had two children, so my research suffered. Just as my younger child started school, and I was ready to go full time again, the department decided they did not want me as a lecturer.

However, thanks to the Daphne Jackson Trust, I found funding to change fields again, and to work on the Cosmic Microwave Background. I became the UK project manager for the Low Frequency Instrument of the ESA Planck mission, for which we built the front end modules for the two lowest frequency channels. This mission was launched in 2009 and very successfully produced a final beautiful survey of the CMB over the whole sky in 2018. What this survey tells us are the high precision values of a whole slew of cosmological parameters – in other words, this work is what lies behind the current standard model of the evolution of the universe after the Big Bang. So you would hardly expect me to ignore or contradict these data, since obtaining them has occupied many years of my life! The theoretical models are as well-motivated physically as we can do at the moment, and the data have been meticulously corrected and validated by hundreds of people over many years.

During the process of the Planck work, my mother died, and my search for the meaning and purpose of life intensified. My daughter went to the local church with her friend, and encouraged me to go along. During an introduction to Christianity course, I voiced the feeling that I wanted to find faith but didn’t know how to get there. “Oh, it isn’t anything you do, it’s something God has done for you” was the answer. This was the light bulb moment. I almost felt a hand on my shoulder and the sense of an immense presence behind me saying “I’ve been here all the time and you have just been ignoring me”. With a huge sense of relief, I accepted this and gratefully turned to God, and here I am seventeen years later.

Having realised that there is a self-consistent Christian worldview, I then needed to square this with my scientific worldview. I rapidly realised that not all Christians would read the creation story in the same way I did, as a beautiful symbolic creation of God’s temple on Earth, filled with its inhabitants, where God joined his creation on its completion. Being the daughter of a geologist, I was also quite happy to recognise the days as the requisite periods required for this process. Divine action in our universe seems to take place through divine command, through the Son and Holy Spirit and through various processes in creation being enabled to mediate further creation. In other words, nature participates in becoming what God has called it to be. God has chosen to set up the physical, chemical and biological laws of our universe, and intimately maintains and sustains them at every moment, allowing the natural world the freedom to develop, mediated by its own processes. To me, this is evidence of God’s overflowing love for his creation.

Science now to me is a process of humankind being allowed to understand the particular details of the processes God has chosen, and to press forward towards an ultimate understanding of the mind of God. As such, it is God showing what he has actually done. This is not to say science understands everything perfectly – we manifestly do not, but we continually make progress, as fast as our little brains can get there! The picture science is revealing is not very like the stories in the Bible, but this is not surprising, because in the context in which there stories were written, God’s actual processes would have been incomprehensible. And the intention was not to give a literal text-book description, but to explore the relationship between God and man, the good and the bad, and how what went wrong has been put right, restoring hope to mankind.

We are fortunate indeed to have revelation in the form of both God’s work and his word. I suspect we are only at the beginning of understanding what he has actually done, but the little we know so far reveals that we live in a universe that is absolutely stunning!

Dr Althea Wilkinson is now partly retired, and is working in the University of Manchester’s Square Kilometre Array Group part time. After some years as project manager of this group, she is now specialising in the frequency synchronisation and timing transfer which is critical to the functioning of the many telescope elements. She enjoys talking about these subjects to schoolchildren with the team from God and the Big Bang.