Althea Wilkinson is now a part time domain specialist in the Square Kilometre Array Signal and Data Transport Consortium, after being project manager of the Consortium for several years. She graduated in Natural Sciences (Physics) at Cambridge and has a PhD in Radio Astronomy from the University of Manchester (Jodrell Bank).

After a spell in California using optical telescopes, she returned to the UK to work on numerical simulations of galaxies at Manchester University. She started lecturing part time in the Physics Dept in Manchester, while bringing up two children. When they went to school she went back to Jodrell Bank, and became project manager on the UK low frequency instrumentation for the European Space Agency cosmology mission called Planck.

Althea was a late convert to Christianity, but has since been involved in talking to teenagers about science and faith in the “God and the Big Bang” Initiative. She is a co-leader of the “Scientists in Congregations” project in her local church in Lindow, Cheshire. 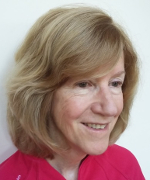