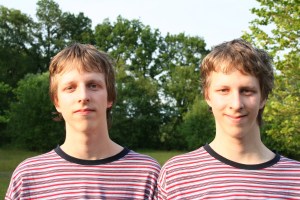 Identical twins are living proof that our genes contribute to, but don’t completely determine our behaviour. But what about our faith? Does our DNA affect our beliefs or how we express them? Denis Alexander and Nell Whiteway have spent the last couple of years working on a project at the Faraday Institute ‘Genes, Determinism and God’*. Nell spoke on the genetics of religious behaviour last month, as part of the Wesley Methodist church Science meets Faith lecture series.

Any parent of identical twins knows that identical DNA does not equal identical personalities. On the other hand, twins do share many characteristics – even if they grow up in separate families – which makes them an ideal population for geneticists to look at.

The statistical result from a twin study doesn’t tell you anything about the probability of inheriting the trait from your parents (if many genes are involved, it’s unlikely it can be easily passed from one generation to another) but it does indicate how likely it is that the difference in behaviour might be caused by one or more genes.

Geneticists have been studying different aspects of religiosity since the 1990s. About 16 twin studies have been done, mostly in the US, and mostly by questionnaires. Participants were asked questions about their church attendance, religious values, personal devotion, or spirituality.

The statistics for every religious trait studied indicated that there was a small but significant genetic component involved, the only exception being choice of religion or denomination, although the differences in variation uncovered were themselves very different in the studies carried out. So genes could be involved in religiosity in some way, but it’s difficult to say how much, or whether one particular religious trait has more of a genetic basis than another.

An obvious alternative explanation comes from studies showing that there is a lower contribution of genetic factors to religious behaviour amongst children, compared to adults. Identical twins spend more time socialising with each other in adulthood than do non-identical twins, and that fact alone could easily explain the differences in religious practice between non-identical adult twins and identical twins. So genetic variation might not be involved at all.

The statistics from these studies also show that the influence of environmental factors is just as significant, or sometimes more significant, than the possible effect of genes. As I can tell from comments on this blog, personal experience can play a big part in influencing a person’s faith decisions.

So, while their findings may or may not be conclusive, what can these studies tell us about faith? As Denis Alexander explained in his recent Cambridge Paper on Genes, Determinism and God, each one of us started as a single cell and developed to adulthood through the integrated action of both genetic and environmental factors that were woven together over time into a coherent whole. To try to separate elements of that development out and say which are the most important elements doesn’t always make sense.

As Nell pointed out in her talk, the factor that these behavioural studies ignored was choice. The assumption is often that we are determined by a combination of our biological makeup and the environment we live in, but the variability between studies shows how fleeting these influences are. We decide to follow different paths, and that affects our future behaviour. Choice is a real factor.

Nell finished her lecture by saying that ‘if…there is a genetic predisposition to belief, does that give some people an unfair advantage? If your genes pre-dispose you to be rational, sceptical and…you grow up in a secularised Western nation with atheistic parents, your chances of believing in any God or performing any form of religious observance might be pretty low. This is a problem if we think that God demands specific forms of religiousness as a pre-requisite to salvation…However, at least in the Christian tradition, God asks for no pre-conditions. Grace is freely given to all. Any genetic or environmental influence that seems to push in the direction of unbelief should therefore be seen as a challenge, not as a condemnation. There is nothing in the science of religious belief to suggest that universal grace cannot be recognised and received by everyone.’