For the love of wisdom of natural things 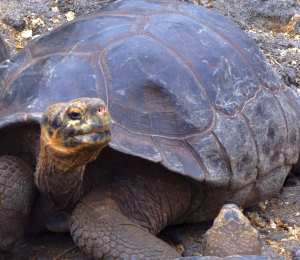 One of the people who set Charles Darwin along the road to evolutionary theory was not a scientist, but the Governor of the Galapagos Islands, Nicholas Lawson. When Darwin and the Beagle crew landed on Charles Island, Lawson invited him to dinner. As they talked, Lawson mentioned that the giant tortoises for which the Galapagos chain was named varied noticeably between islands. In fact, said Lawson, if any tortoise was brought to him, he could identify which island it came from.

It turns out that the tortoise-naming party trick was not exclusively Lawson’s. Whether he was just repeating what the locals said, or had actually studied the tortoises personally, the fact remains that the person who set Darwin on the course of studying variation among species on the Galapagos islands was not a scientist.

John Bryant, the author of last week’s guest post, told this story during his lecture at this year’s Faraday Summer course, and I enjoyed it because it brings science down to earth. It’s about being observant and curious, and being in the right place at the right time. When we have time on our hands, like the Governor stranded on a small island chain, we can look around ourselves and notice things.

In his book Faith and Wisdom in Science, Tom McLeish told another story that demonstrates how science can become more approachable. Some time ago he was invited to speak at the Dewsbury Women’s Institute, so he spoke about his research on polymers, hoping that the women of this Yorkshire mill town would connect with his desire to develop new fibres.

One person in particular, a woman called Betty who had worked in a mill since the age of 15, listened as if her life depended on it, and peppered him with questions afterwards. She had always been interested in how things work, but until that day had not found anyone to answer her questions. Whenever she had asked about the processes they were using in the mill she was just told to get on with her job.

From the outside, science can seem a closed specialty, hemmed in by intimidating jargon. When McLeish described science as ‘the love of wisdom of natural things’, however, he realised he was opening a door. He was moved to see that Betty was not the only person who shed a tear when her questions were finally taken seriously, confirming that her enquiring mind was indeed probing in the right direction – only 50 years too late.

Hearing about people like Betty or Nicholas Lawson reminds me that science is a very human activity. McLeish is convinced that there is a future in ‘science therapy’. At the end of his book he asked the question, “If a reintroduction to the activity of representing both inner and outer worlds in paint, music and drama can help to heal minds, what hope might there be for a participation in a gentle and contemplative science in restoring a broken or misunderstood relationship with the physical world?” I hope that some of the articles on this blog might serve a similar purpose, helping Christians in particular to reconnect with science and celebrate what they find.