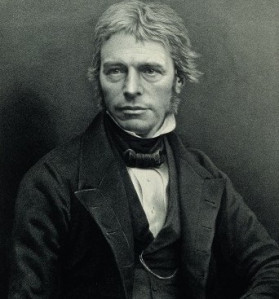 Michael Faraday would no doubt be acutely embarrassed if he had lived to see an institute named after him. He was one of the greatest experimental scientists of all time but he also gave himself to public education, shunned wealth and fame, and belonged to a small Christian denomination called the ‘Sandemanians’. This week at the Faraday Institute we hosted the chemist and former director of the Royal Institution, Sir John Meurig Thomas, who spoke about the Genius of Michael Faraday.

Michael Faraday (1791-1867) was the son of a blacksmith. He received a very basic education as a child, and was apprenticed to a bookbinder at the age of 14. Faraday was extremely bright, and finding himself surrounded by books, decided to educate himself – inspired by Isaac Watts’ ‘Improvement of the Mind’. A customer noticed his intelligence and gave him tickets to a series of lectures by the great chemist Humphrey Davy.

In the early nineteenth century the chemical revolution was in full swing. Successful experimentalists like Davy were celebrated figures, and drew huge audiences. Faraday was gripped. He wrote up his notes from the lectures – three hundred pages including illustrations – and sent a bound copy to Davy, asking for a job. Davy was so impressed by Faraday’s work that he employed him as a secretary, and found him a job at the Royal Institution the following year.

Davy took Faraday on a tour of Europe, which gave him the opportunity to meet the scientific intelligentsia of the day but highlighted his position as ‘not a gentleman’ – Faraday was unhappy and nearly went home early. Despite his lower class origins, Faraday was appointed to the Royal Society at the age of 33, became Director of the Royal Institution laboratory the following year, and Fullerian Professor of Chemistry at the same institute eight years later.

During his time in the laboratory Faraday focused on studying the electrical properties of things. His practical skills were extremely good – perhaps due to his careful training in bookbinding – and his laboratory notebooks are beautifully written. The work he did was foundational in the development of electric motors and reliable electric power sources. He did much to establish classical field theory, and discovered a number of important organic compounds, including benzene (an important basic ingredient for making industrial chemicals). Einstein kept Faraday’s picture on his study wall alongside his other two intellectual influences, Sir Isaac Newton and James Clark Maxwell.

Though he worked long hours in the lab, Faraday did manage to find time for other things. He was married, but he and his wife Sarah had no children. Sunday was a marathon of church services lasting many hours, with another gathering on Wednesday evenings. As a church elder he visited members in their homes and preached many sermons (sadly no records remain). Some have questioned whether Faraday would have supported evolutionary theory, but there’s no evidence that he read Darwin’s Origin of species or engaged at all with this aspect of science.

Faraday was a great believer in public education, and he started the Royal Institute Friday Evening Discourses and the famous Christmas Lectures. He spoke in the plain style of a Sandemanian preacher, and drew huge audiences: both Charles Darwin and Charles Dickens attended his lectures. Working during the Industrial Revolution, he could have been extremely wealthy but gave away any extra money he earned to those who needed it, never patented any of his inventions, and worked on a number of public projects – the ‘Davy lamp’ for miners, lighthouses, and assessments of industrial pollution to name a few. Somehow, he also found the time to make his own furniture…

I’m impressed, inspired and intimidated by Michael Faraday, but I’m sure he would also find that very embarrassing. His main motivation for doing science was to glorify God by showing how incredible the world is. I’m sure he had the usual collection of faults, of the sort that are not interesting to biographers or relevant to readers. He was clearly a private man, and when his wife asked him why he chose to become a full member of the Sandemanian church after their marriage he said, ‘That is between me and my Lord’. He rejected a knighthood and the presidency of the Royal Society (twice) and Royal Institution, and turned down burial at Westminster Abbey. He seemed to keep his private life very separate from his science, though his moral convictions came through (he refused to be involved in developing chemical weapons for use during the Crimean war). On his retirement he withdrew from the world of science and lived only two years, dying at the age of 76 and buried without ceremony. His agnostic friend Sir John Tyndall described him as a ‘Just and faithful knight of God’, and ‘the greatest experimental philosopher that the world has ever seen’.

the book of nature, which we have to read, is written by the finger of God

No attentive listener ever came away from one of Faraday’s lectures without having the limits of his spiritual vision enlarged, and without feeling that his imagination has been stimulated to something beyond the expression of physical facts.