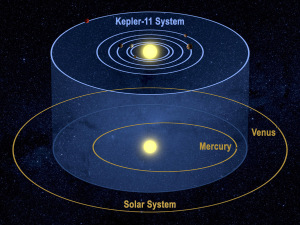 But usually, when the popular hubbub has subsided and the novelty has been chewed over by real theologians, real scientists and real philosophers, both sides find themselves pretty much where they were before. So it was with Copernican astronomy, with Darwinism, with Biblical Criticism, with the new psychology. So, I cannot help expecting, it will be with the discovery of ‘life on other planets’ if that discovery is ever made.

from the essay ‘Religion and Rocketry’ by CS Lewis, 1958

Religion and Rocketry is a fabulous and faintly sarcastic essay, where we see CS Lewis wrestling with the issues raised by the existence of intelligent life on other planets, while keeping in mind the massive conjectures needed to even address the question. (The final paragraph, which I will leave you to read for yourself in this transcript, is a very important one for those involved in the intellectual defence of Christianity.)

The above quote was used by NASA Astronomer Jennifer Wiseman in the conclusion of her lecture ‘Exoplanets, Life and Human Significance‘ in Cambridge this week, in which she explained the science behind the search for life on other planets, and explored the theological implications of any positive findings.

Wiseman’s lecture was particularly timely because a team of astronomers working on the Kepler space telescope recently identified a solar system something like ours. In their Nature paper they report ‘observations of a single Sun-like star, which we call Kepler-11, that reveal six transiting planets, five with orbital periods between 10 and 47 days and a sixth planet with a longer period. The five inner planets are among the smallest for which mass and size have both been measured, and these measurements imply substantial envelopes of light gases.’

The Kepler observations are not evidence for the existence of life on other planets, but they are a step in the right direction if there is any such evidence to be found. The question of life on other planets is very important for those engaged in origins of life research, who are always extremely excited about even the smallest glimmerings of evidence for life. It seems to me that the discovery of good evidence for microorganisms on other planets may reasonably be expected to be discovered in the next few decades, and may well turn the whole field of origins of life research on its head. (If I am proved wrong and anyone holds onto this blog post for that long, I’ll be flattered.)

The discovery of intelligent life is still the stuff of science fiction. But what would be the implications of such a discovery be for the religious community, and Christians in particular?  Theologian Ted Peters conducted a survey of more than 1,300 people from seven different religious traditions. The majority responded that contact with another intelligent life form would not cause the collapse of their faith.

So where does that leave us? I expect it leaves us with our human urge to explore very much intact! You could debate the wisdom of spending millions on space exploration but, with a move towards space telescopes and perhaps commercial space flight rather than multimillion dollar space shuttles, space exploration is – I think – something that we should not ignore. As Wiseman said in the Test of Faith documentary,

…I think it’s exciting as Christians to go exploring, because we’re never going to find anything that’s outside of God’s realm. Everything is part of this majestic creation, and the more you discover the more amazed you get by thinking about God, and so I think exploration is a divinely Christian activity and people should be excited about it.