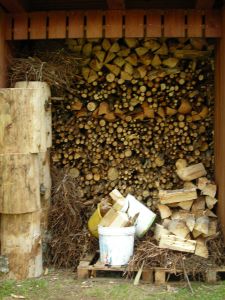 Human activity on our planet continues to cause wide scale ecological havoc at such a rate that it can be tempting to give up hope, sit back, and let things unfold however they will. When Richard Bauckham spoke at the Faraday Institute a couple of weeks ago his message was far more positive. Yes, massive environmental damage has been done and some of the consequences are unstoppable, but from his perspective as a theologian there is real hope. I was inspired by Bauckham’s talk because he has taken a realistic look at the science of climate change and other ecological disasters in the light of his faith, and has come away with a plan of action that is not the least bit miserable.

Anyone promising hope needs to know the context they’re speaking into. Bauckham described how the New Testament book of Revelation was written in the first instance for Christians living under intense persecution in Rome (hence its coded ‘apocalyptic’ language), and it inspired them to keep going. Our context is a faded utopia of economic and technological growth. It was once thought that the potential for improvement was pretty much limitless. Our hope was to stop environmental damage through economic and technological fixes, but climate change is now underway and further change is inevitable – with both foreseeable and unforeseeable consequences. We can only try to stop things getting much worse. How can we go on hoping?

There are two kinds of hope. Christians have an ultimate hope for a renewed creation at the end of time. The emergence of this new heaven and earth is conditional on God – thankfully it does not depend on us, so we will not be disappointed. We also have what Bauckham called ‘proximate hopes’ for the short-term here-and-now future that can be disappointed because they depend on us. How do we keep going when we know we will often fail? An important theme of the Bible is that the best fruits of our labour will be preserved in the renewed creation. So our ultimate hopes can nourish our proximate hopes. We do not hold the tiller of history, but we can do something.

The well-known passage in I Corinthians about faith, hope and love is relevant here. Many people practice these virtues regardless of their beliefs, but we often turn in on ourselves in despair and self-centredness. In Bauckham’s view they need to be renewed and refocused on God.

Love is the greatest of the three because it’s mutual between God and us. Our love expands as we learn to love what God loves, including his creation. The story of Genesis tells how we were given dominion over something with enormous value: the whole Earth. We can only care for the world if we appreciate it in something approaching the way God does. Love empowers and energises our hope.

Faith is more than simple optimism in human capabilities. We can’t expect to achieve what we hope for all by ourselves. We need hope in God’s ability to provide. God can ‘make of what we do much more than we can make of it ourselves’: that’s how he honours what we do.

Finally, hope needs to be directed by realism. In his book ‘Eaarth: Making a life on a tough new planet’, US-based environmentalist Bill McKibben says that we are facing unstoppable climate change, but we can limit some of the damage. If we understand the way the world has changed we can learn how to live with it. We need to be mature and realistic – for example we might need to neglect some things in order to protect the most important parts – but according to McKibben, ‘Maturity is not the opposite of hope, it’s what hope makes possible’. This new kind of hope will involve scaling down, going local not global, maintenance not growth, and controlled decline (presumably in the extravagant standards of living largely seen in Western countries). In that way, we should avoid collapse.

The benefits of our new reduced lifestyle will include a rediscovery of local community. This is hope in search of realistic possibilities: discernment and imagining guided by love. The example Bauckam used to illustrate this was the Biblical story of David and Goliath. The boy shepherd David defeated a soldier much larger than himself through the confident use of a good idea. David was able to discern real possibilities for hope in what seemed like a hopeless situation.

So we now have the opportunity to be imaginative: How can we do things quite differently? How should we develop appropriate technology? What are our priorities for preserving non-human creatures? How can we scale down to local life without abandoning relationships and responsibilities? How do we care for developing countries that are badly affected by ecological change? We need to focus more and prioritise. Love will find a way.