Echoes of a Voice 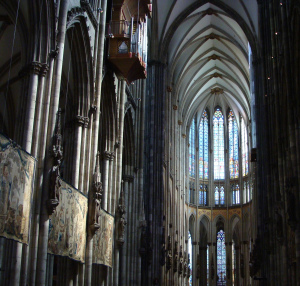 What is the difference between a cathedral and a physics lab? Are they not both saying: Hello?

The Christian writer J.W. Sire quoted this line from Annie Dillard[1] in Echoes of a Voice, a new book that explores the phenomenon of spiritual or ‘transcendent’ experiences. What are they, why do they happen, and do they mean anything?

I have written about the more numinous side of science many times on this blog (see Transcendence and Transcendent Science). Scientists often speak of a reality beyond the objects they are studying, and for some this is encountered in powerful – if rare – experiences of wonder and awe. Perhaps my experience in the Smithsonian Museum that I described last week also comes into that category?

I found Sire’s analysis of these experiences helpful. He describes moments that are ‘emotional, intellectual, highly charged, usually sudden, unannounced, often odd, some weird, others glorious’, and places them on four different levels:

According to Sire, level 1-3 experiences are fairly common, but level 4 is rare. He gives a wide range of examples from artists, writers, philosophers and scientists: Emily Dickinson, William Wordsworth, Albert Camus, Vaclav Havel, C.S. Lewis, Virginia Woolf, Stephen Weinberg and many others. Some have a religious background, some are interested in spirituality, and others are atheists. Some of the examples given carried a particular meaning, and others simply made the person curious to know the meaning of what they had experienced.

Sire goes deep into the analysis of transcendent experiences, using the work of philosophers and psychologists to try to understand what is happening and whether it can have any specific meaning. At the end of the last chapter of the book, he puts everything that has been discussed into the context of a properly nuanced argument for the truth of Christianity.

In the end, Sire borrows the New Testament scholar Tom Wright’s phrase ‘echoes of a voice’ to describe these aspects of life, because for him they point to a person: “the Creator who stands behind, before, below, beyond all creation”. He believes that these times of awe or meaningfulness are signals that point to a real, personal God.

I was pleased to see that Sire had found the work of Simon Conway Morris and Francis Collins – two scientists who have been open to questions of meaning in their work. Collins has described how he experienced several significant moments when he was young – “being transported by the experience of looking through a telescope”, “a Christmas Eve where the descant on a particularly beautiful Christmas carol… left me with a sense of unexpected awe and a longing for something I could not name”, and “this same sense of awe and longing, this time mixed with a particularly deep sense of grief” as the Berlin Philharmonic played Beethoven after the death of a number of Olympic athletes in 1972.

These experiences – both of science and art – meant that when Collins was faced with a question of belief, “all [his] arguments seemed very thin”. Now, as a fully-fledged scientist and also a believer in God, he is able to say that “for a scientist who occasionally is given the remarkable privilege of discovering something not previously known by man, there is a special kind of joy associated with such flashes of insight.”

Whether you react as Collins did or not, we all have these meaningful experiences from time to time. For many people, these are significant moments that will be remembered for a long time. I appreciated Sire’s insight and thorough analysis, and recommend his book to anyone who is interested in exploring this area of human experience in greater depth.